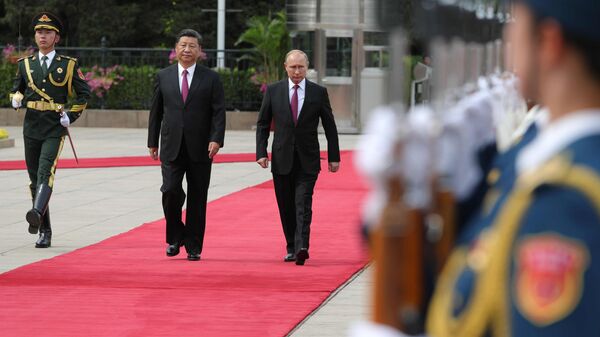 MOSCOW (Sputnik) - US President Donald Trump said he will meet Russian President Vladimir Putin and Chinese General Secretary Xi Jinping at the G20 summit in Osaka next week, reiterating the necessity of Washington building good relations with both Moscow and Beijing.

In May, the US escalated its trade dispute with China by including another $200 billion worth of Chinese goods in the 25 percent tariff category. China retaliated by hiking tariffs on $60 billion worth of US imports in June.

Trump said in a statement on Tuesday that he will have an extended meeting with Xi in Osaka.

Kremlin spokesman Dmitry Peskov said Sunday that a full-fledged meeting between Russian President Vladimir Putin and US President Donald Trump could take place on the eve of the G20 summit, but noted that Russia had not yet received a go-ahead from Washington.

Peskov said earlier that there was undoubtedly a chance that the Russian and US leaders would meet at the G20 Summit in Japan.