Scientists Shed Light on Mystery of Nasca Lines in Peru 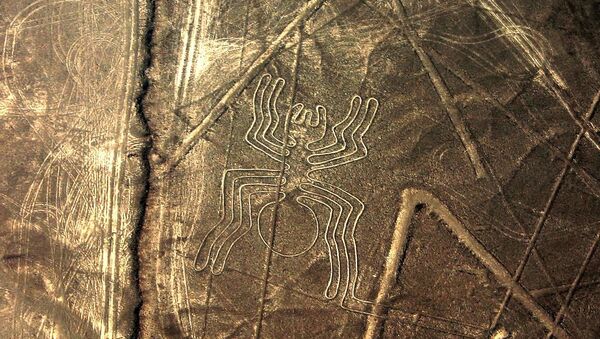 © Wikipedia / Paul Williams
Subscribe
The lines and geoglyphs of Nasca and Palpa are located some 400 kilometres south of Lima, Peru and form a World Heritage Site spanning about 450 square kilometres; the mysterious art is believed to have been carved into the ground by the pre-Inca people.

Scientists have offered a new take on the intriguing images of huge birds carved in the desert plains of southern Peru around 2,000 years ago.

In a joint effort, a team of experts applied an ornithological approach to identify the bird shapes in a study published in the Journal of Archaeological Science: Reports.

Masaki Eda of The Hokkaido University Museum, Takeshi Yamasaki of the Yamashina Institute for Ornithology, and Masato Sakai of Yamagata University in Japan have thus identified 16 bird geoglyphs among more than 2,000 carvings in the area.

“Until now, the birds in these drawings have been identified based on general impressions or a few morphological traits present in each figure.

“We closely noted the shapes and relative sizes of the birds' beaks, heads, necks, bodies, wings, tails and feet and compared them with those of modern birds in Peru,” said Masaki Eda.

The new take allowed the team to re-classify a previously identified hummingbird as a hermit bird; and a guano bird and a previously unidentified bird drawing as pelicans.

Although the identified birds can be found in Peru, their habitats extend to regions other than where the drawings were made, with hermits found chiefly in forests on the eastern slopes of the Andes, and pelicans inhabiting the coast.

“The Nasca people who drew the images could have seen pelicans while food-gathering on the coast. Our findings show that they drew exotic birds, not local birds, and this could be a clue as to why they drew them in the first place,” explained Eda.

Emboldened by the results, experts intend to compare these carved images with birds drawn around the same period on pottery and with bird remains excavated from Nasca ruins. Thus, the researchers hope to identify more of the birds depicted in the geoglyphs in a significant step towards revealing their significance and what motivated the ancient peoples to carve them to begin with.

The lines and geoglyphs of Nasca and Palpa are located some 400 kilometres south of Lima, Peru and form a World Heritage Site covering an area of about 450 square kilometres. The carvings by pre-Inca people include lines, geometric designs, and animal and plant drawings, are so large that they are best seen in aerial photographs.

000000
Popular comments
That is about as scientific as flying by the seat of your pants is.
JABOOTIE
20 June 2019, 17:17 GMT
000000
Newsfeed
0
New firstOld first
loader
LIVE
Заголовок открываемого материала
Access to the chat has been blocked for violating the rules . You will be able to participate again through:∞. If you do not agree with the blocking, please use the feedback form
The discussion is closed. You can participate in the discussion within 24 hours after the publication of the article.
To participate in the discussion
log in or register
loader
Chats
Заголовок открываемого материала
Worldwide
InternationalEnglishEnglishMundoEspañolSpanish
Europe
DeutschlandDeutschGermanFranceFrançaisFrenchΕλλάδαΕλληνικάGreekItaliaItalianoItalianČeská republikaČeštinaCzechPolskaPolskiPolishСрбиjаСрпскиSerbianLatvijaLatviešuLatvianLietuvaLietuviųLithuanianMoldovaMoldoveneascăMoldavianБеларусьБеларускiBelarusian
Transcaucasia
ԱրմենիաՀայերենArmenianАҧсныАҧсышәалаAbkhazХуссар ИрыстонИронауОssetianსაქართველოქართულიGeorgianAzərbaycanАzərbaycancaAzerbaijani
Middle East
Sputnik عربيArabicArabicTürkiyeTürkçeTurkishSputnik ایرانPersianPersianSputnik افغانستانDariDari
Central Asia
ҚазақстанҚазақ тіліKazakhКыргызстанКыргызчаKyrgyzOʻzbekistonЎзбекчаUzbekТоҷикистонТоҷикӣTajik
East & Southeast Asia
Việt NamTiếng ViệtVietnamese日本日本語Japanese俄罗斯卫星通讯社中文（简体）Chinese (simplified)俄罗斯卫星通讯社中文（繁体）Chinese (traditional)
South America
BrasilPortuguêsPortuguese
NewsfeedBreaking
00:57 GMTIAEA Claims Iran Failed to Fully Honor Agreement on Nuclear Monitoring Equipment
00:18 GMTYouTube Head Expects to Continue Work in Russia Despite Disagreements With Authorities
YesterdaySeoul Calls on Pyongyang to Restore Communication Lines Ahead of Possible Talks
YesterdayEuropean Commission Vice President Congratulates SPD With Strong Social Democratic Result
YesterdayAlternative for Germany to Continue Supporting Nord Stream 2 After Election - Co-Chairman
YesterdayMilitants in Aleppo Tried to Force Way From Turkish-Controlled Area - Russian Military
YesterdayGermans See No Use to Vote for CDU Without Merkel at Helm - Afd Politician
YesterdayGerman Conservatives Suffer Catastrophic Defeat in General Election – Senior Official
YesterdayGermany's FDP Leader Hints at Coalition Talks With Greens
YesterdayMacron Files Complaint Against Paparazzi for Invasion of Privacy - Reports
YesterdayTwitter Removes Blue Verified Badge From Accounts of Several Afghan Ministries - Reports
YesterdayLaschet, Scholz Want Coalition Talks to End by Christmas
YesterdayCIA Was Ready to Start Firefight in London to Prevent Russia From Busting Out Assange, Media Claims
YesterdaySuicide Pact? Top Labour Remainer Says Party Should Campaign to Rejoin EU
YesterdayVideo: Miss France 2019 Confronted by 'Teenage Gang' That Threw Stones at Her in Paris
YesterdayFree For All! Enraged Moped Drivers Fight in London Amid Lack of Fuel - Video
YesterdayPSG's Kylian Mbappe Caught on Camera 'Lamenting Neymar Would Not Give Him Passes'
YesterdayPowerful 5.7-Magnitude Earthquake Hits Philippines' Largest Island Luzon
YesterdayInfrastructure Plan: Pelosi Says She 'Never' Brings a Bill to Floor 'That Doesn't Have the Votes'
YesterdayUsyk vs. Fury? Gypsy King's Twitter Like Leaves Fans Buzzing About Possible Heavyweight Clash