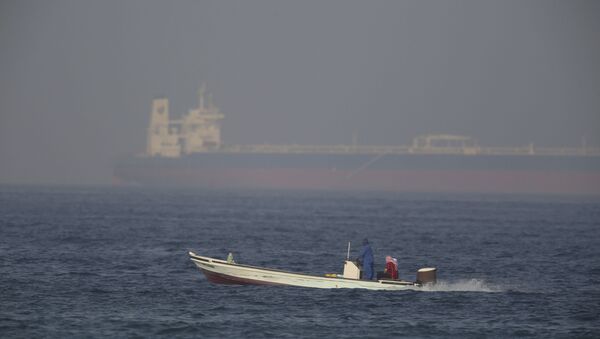 © AP Photo / Jon Gambrell
Subscribe
Last week, two oil tankers, the Kokuka Courageous and the Front Altair, were attacked in the Gulf of Oman near the Strait of Hormuz. While the causes of the incident remain unknown, the United States has claimed that Iran sabotaged the vessels.

The US military subsequently released a video showing alleged Iranian forces removing an unexploded mine from one of the tankers, but this footage did not show any boat names or flags that could be used substantiate Washington's claims.

Iran has denied the allegations.

The US Central Command released new images on Monday that it claims show alleged Iran Revolutionary Guard (IRGC) members removing an unexploded limpet mine from the Kokuka Courageous after it had been attacked on 13 June in the Gulf of Oman.

"Iran is responsible for the attack based on video evidence and the resources and proficiency needed to quickly remove the unexploded limpet mine", the US military's Central Command said in a statement.

#BREAKING Latest images from US military show better view of what appears to be Iran #IRGC on fast attack craft approaching damaged tanker, removing limpet mine. Damage appears to be clearly made by limpet mine, weapon used by #Iran in past. pic.twitter.com/i6PNQgGUGX

The incidents, which caused damage to the Norwegian-owned Front Altair and the Japanese-owned Kokuka Courageous, came just a month after the United Arab Emirates reported sabotage attacks against four other commercial vessels off the nation’s coast.

In the wake of the attack, US President Donald Trump ordered for the USS Mason destroyer to be dispatched to the area, adding to the Pentagon's already significant military presence in the region.

US-Iranian tensions flared last year after Washington unilaterally withdrew from the 2015 nuclear agreement with Iran and began reinstating sanctions on the Islamic republic. On 8 May, Tehran announced that would partially discontinue its obligations under the nuclear treaty.

The US has increased its forces in the Middle East in recent weeks, in what US National Security Adviser John Bolton has called a clear and unmistakable message to Iran. The new US deployments in the region include an aircraft carrier strike group, Patriot missiles, B-52 bombers, and F-15 fighters, according to the Pentagon.

Iranian Supreme Leader Ayatollah Ali Khamenei said that Tehran does not intend to wage war with the US, but will continue to resist Washington. Acting US Defence Secretary Patrick Shanahan made similar remarks, noting that Washington did not seek war with Iran.

000000
Popular comments
LIE! Already been proven by Japanese tanker operater.
Foxylady
17 June 2019, 23:40 GMT8
000000
They ate sure of it! They were israely boats. It's a shame that they can't painr irani flags on the boats, the soldiers and the limpet mines. Just give them a coupke of days and they will manage it!