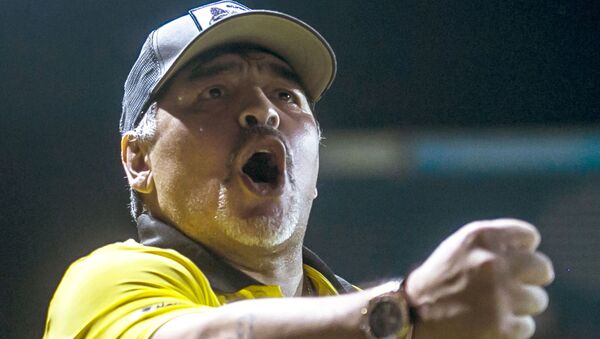 Maradona watched the Argentina-Colombia match from the stands after he travelled to Buenos Aires for medical reasons, leaving the team he currently manages - Mexican second division club Dorados.

Diego Maradona has lashed out at the Argentinian team after they were defeated by Colombia in the opening game of the Copa America championship, due to continue all the way to 7 July.

"It makes you think Tonga could beat us", Maradona said, as quoted by the Spanish edition Marca, before thundering on:

"There's a prestige that we built with kicks... from blows. Remember when we all went out to Peru, when we broke the bus... What's left of all that? What is the shirt?”

"You're offending the shirt, your mother's ****",  58-year-old Maradona rounded off his foul-mouthed rant with.

Maradona after 🇨🇴 beat 🇦🇷: "It makes you think Tonga could beat us. There's a prestige that we built with kicks... from blows. Remember when we all went out to Peru, when we broke the bus! What's left of all that? What is the shirt? You're offending the shirt, you mother f*cks!" pic.twitter.com/v5BGodOnDL

However, the footballer, who earlier stirred controversy following a cocaine snorting incident, didn’t receive many thumbs-up online, with one asserting that he had “ruined it with own hands”:

U ruined it with your own hands

He's still alive? I thought he would've OD'd by now or be in a rehab

Sometimes he's talking too much 😑😑

The 1986 World Cup winner is currently residing in Buenos Aires after having suspended his job as Dorados coach in Mexico for medical reasons. However, in April he said that he was planning to leave Mexico, hinting at the partiality of the league’s referees against him.

A little over half a year ago, the Argentinian midfielder star moved to Mexico to train and instruct a Sinaloa club, Dorados, succeeding in turning them around and leading the squad to leap from 13th in their 15-team division to second spot.

However, his proteges lost in their match in the Mexican second-division finals to Atletico San Luis, with their chance of being promoted to the first division being quashed, much like Diego Maradona’s hopes of winning his first coaching title, which he has recently been cherishing, according to The Buenos Aires Times.

Maradona, along with Brazil’s Pele, were deemed the best FIFA players of the 20th century.