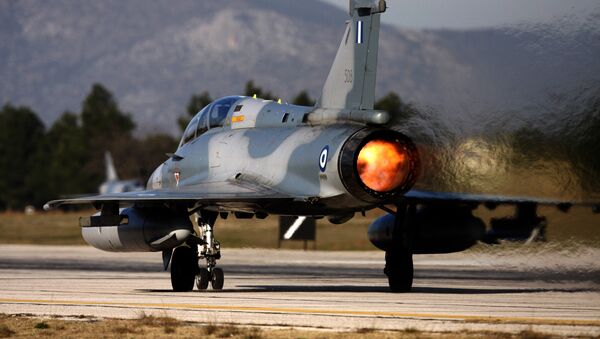 ATHENS (Sputnik) - The Communist Party of Greece (KKE) said on Friday that the United States' plans against Iran would bring nothing good for nations in the region and urged for all US and NATO bases in Greece to be closed.

"The last attacks against tankers in the Bay of Oman ignite once again the developments around Iran. The USA as if they were 'already prepared', put Iran in the cross-hair and rally more military forces in the region ... The exacerbation of the situation around Iran bears no good omen for the peoples ... Close down now all foreign US and NATO bases in Greece. Return all Greek military forces that are participating in NATO and EU missions," the party said in its statement.

According to the KKE, the US aggression against Iran escalated after Washington introduced an embargo on Iranian oil exports. Moreover, uncertainty around Tehran’s nuclear program caused by Israeli threats to bomb Iran’s nuclear facilities are only adding fuel to the fire, the party stressed.

The party went on to suggest that the United States' actions in the region were rooted in the "competition of the imperialist powers for the control of energy-resources, for the roads of transportation of energy-resources and commodities, for market shares."

The KKE also accused other Greek parties such as Syriza, New Democracy and Movement for Change, which advocate strategic cooperation with Washington, of creating risks for Greece.

Tensions between the United States and Iran escalated after two oil tankers, Front Altair and Kokuka Courageous, were reportedly attacked on Thursday near the strategically important Strait of Hormuz, which links the Gulf of Oman and the Persian Gulf. While the circumstances around the incident remain unclear, US President Donald Trump has directly accused Iran of the incident.

Commenting on the tanker incident earlier on Friday, Iranian President Hassan Rouhani said that the United States was taking steps to undermine stability in the Middle East and the whole world. According to Hossein Amir-Abdollahian, a senior foreign policy adviser to the Iranian parliament speaker, US security services and Israeli intelligence agency Mossad may be behind the recent destabilisation in the Gulf region.