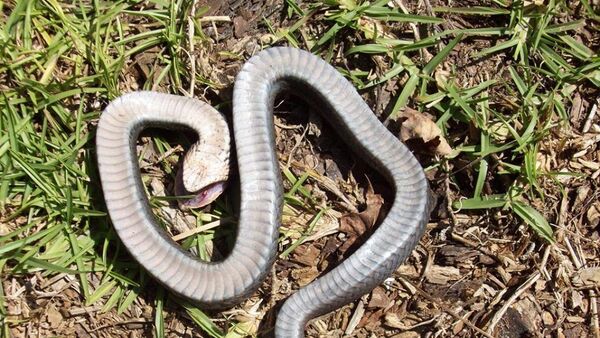 “Instead of watching clouds to see if we can keep weekend weather on track, let's play a game! Who is this “famous” NC snake? A cobra? A zombie snake? It’s a harmless one,” the Facebook post reads, following photos of the snake which is not as dead as it seems.

The snake, which in fact is called the eastern hognose, varies in colour but the most common ones are usually brown or grey with dark brown blotches. It isn't poisonous, but they tend to display cobra-like characteristics, according to Amphibian and Reptiles of North Carolina.

"When threatened, hognose snakes hiss loudly and spread their necks like cobras do, resulting in the nicknames 'puff adder' or 'spreading adder,'" Amphibian and Reptiles of North Carolina said in a statement. "They rarely bite during these displays, but they may strike repeatedly."

The name “zombie snake” however, made commentators and some media outlets believe that the snake can pose an immediate danger, so North Carolina State Parks and Recreation issued an additional statement to CBS News noting that while the snake “does play dead when threatened. It does NOT die and come back to life like a zombie.”

Ironically, this isn't the first time a misnomer inadvertently led to the spreading of myths about the poor eastern hognose. According to the Florida Museum, another common nickname for the eastern hognose is the "blow viper," because "another old myth says that the Hognose Snake can mix venom with its breath and is thus able to kill a person from a distance of twenty-five feet. In truth, its breath is harmless."