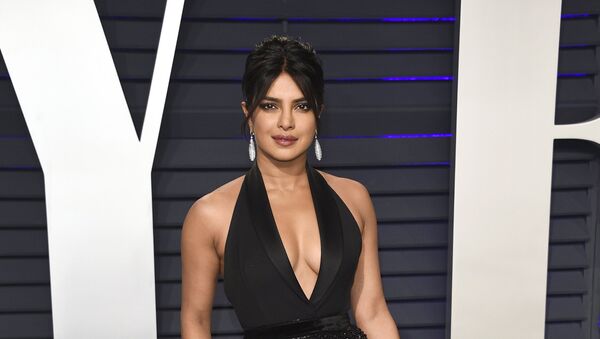 In what appears to be by far not the first case of online shaming, Indian-born cinema superstar Priyanka Chopra has faced a severe backlash over an item of clothing that she wore while posing in front of the cameras.

​Many openly voiced their outrage at the outfit allegedly not being genuinely Indian and not appropriate for the photoshoot:

“Priyanka Chopra should be ashamed becoz [sic] even males like sarees”, one netizen wrote, while a number of others posted a picture demonstrating how the overall outfit should look:

Dear Priyanka Chopra, this is a saree with jewelry. Sincerely, India. pic.twitter.com/hQjN7EwjlL

Karunajee..The day I saw the song ‘ maa da ladla bigad gaya’ - that day itself I thought what you thought now about Priyanka. All her beauty is down into gutters if she choose to drape a saree the way she has pic.twitter.com/9J4ia3R6VW

To defend her choice of outfit, Priyanka recounted that her mother had notably chosen the “beautiful sarees made of French chiffon with a bindi over there”, while arguing that the “shiny, sequinned, over-the-top Christmas-tree” ones are not what she would personally have picked to wear.

Chopra shared a series of snapshots from the controversial photoshoot on Instagram, captioning them in the following way:

“Fashion is such an important part of global culture, often arising from centuries of tradition, and doesn’t go out of style when the seasons change”. She added that the “sari” is one of the most recognised “silhouettes” originating from India.

The actress asserted that beauty for her is found in versatility, “not just in drape and fabric”. “It embodies elegance, femininity, and power, and I love how I feel when I’m wearing one”, the model concluded.

The said saree designer, Tarun, weighed in, saying that there is by no means anything vulgar about it, but the fact that no blouse was worn beneath “makes it a global statement”. He went on to prove his point:

“The transition from alluring Indian beauty (in Priyanka’s last Bollywood outing, Bajirao Mastani) to this modern goddess for a mainstream fashion cover only speaks of her (Priyanka) versatility”, he remarked, emphasising that Priyanka is truly “a modern Indian icon”.

A great deal of Internet users appear to have shared the stance, with many rushing en masse to defend the Indian cinema star and approving of the way she showcases her free will:

Some even argued that it is more than common to wear a saree in India with nothing underneath it:

To those taking a dig at Priyanka Chopra’s blouse-less saree,
blouse was introduced to Indian women by the British. Even today many women in rural India wear sarees without blouses. I have seen so many in my travel across Jharkhand, Odisha, Bengal.Pic of tribal woman from Sukma: pic.twitter.com/6ngK48j3Oy

Priyanka is meanwhile not new to Internet trolling, especially after she faced strong backlash and was hailed with questions following her marriage to Nick Jonas, a man who’s ten years younger than her.