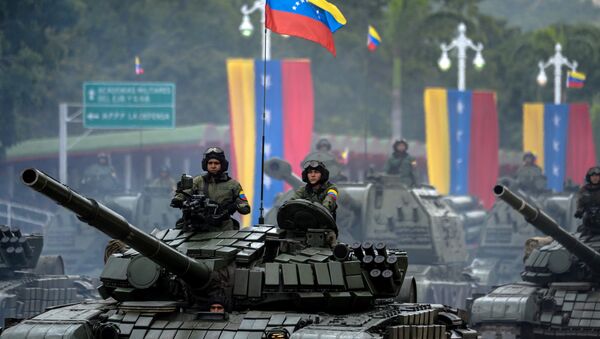 On Monday, US President Donald Trump tweeted that Moscow allegedly informed the US about having "removed most of their people" from Venezuela.

Russian presidential spokesman Dmitry Peskov, commenting on the words of US President Donald Trump about Russians allegedly leaving Venezuela, said Russia did not officially notify the United States about that, adding that Russian specialists continue to work there.

"Actually, there are, in fact, specialists there who are engaged in servicing previously supplied equipment. This process is proceeding in a planned manner. And we don't know what it means 'removed most of their people'," he said.

The spokesman further noted that Trump's statement waslikely based on newspaper sources.

"It seems that this is an indirect link to some newspaper sources of information, because there were no official reports on this subject from the Russian side," Peskov told journalists.

ICG, Lima Group Committed to Peaceful Transition in Venezuela - Statement
Prior to Trump's Monday statement, Russian Ambassador to Venezuela Vladimir Zaemsky refuted claims made by The Wall Street Journal on Sunday that Russia had significantly pared down the numbers of Rostec staff working in Venezuela in recent months.

Moscow has provided Venezuela with military support in the form of military specialists operating in the country under contracts for the supply of Russian-made weapons systems.

The contracts were signed before the start of the political crisis in the country earlier this year, and Russian officials have indicated recently that they have no plans to sign new contracts on the delivery of weaponry to Venezuela at the moment given the financial difficulties the country is in.

In late January, just weeks after Venezuelan President Nicolas Maduro's inauguration for a second term, Venezuelan opposition lawmaker Juan Guaido proclaimed himself the country's 'interim president', receiving immediate recognition from the US and its allies.

Russia, China and a host of other countries voiced support for the Maduro government, and urged outside powers not to interfere in Venezuela's internal affairs. Caracas has characterised Guaido's efforts to usurp power as a "failed" foreign-backed coup attempt.