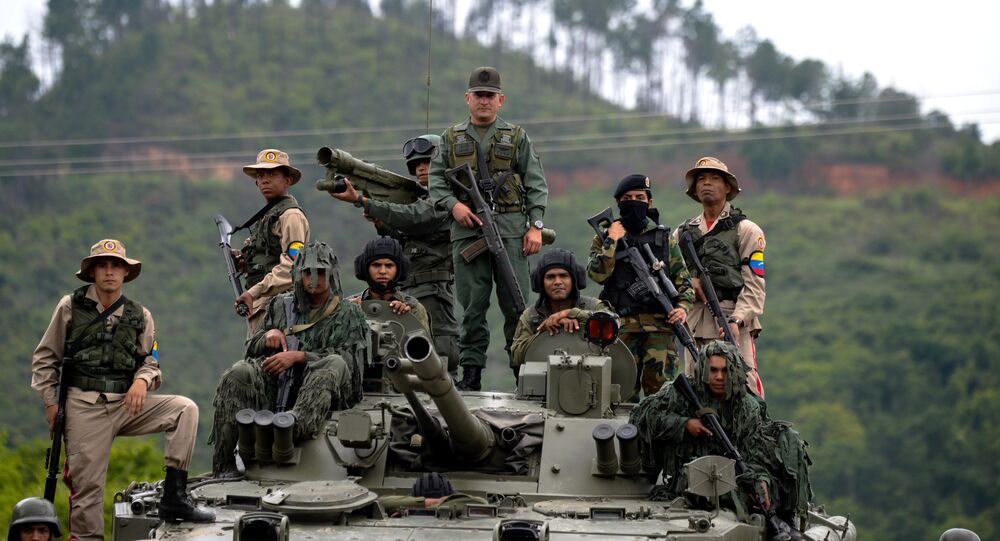 The remarks come on the heels of a report by the Wall Street Journal that President Nicolas Maduro was embarrassed about Russia allegedly cutting its military advisers in Venezuela from about 1,000 several years ago to "just a few dozen" today.

Russian Ambassador to Venezuela Vladimir Zaemsky has refuted reports about the withdrawal of Russian military specialists from the Latin American country.

"This is another piece of 'news' which has absolutely nothing to do with reality. Work is being carried out in accordance with existing obligations, and there is no talk of any cuts," Zaemsky said on Monday.

© Sputnik / Maksim Blinov
Russian Rostec Says Media Overestimate Its Presence in Venezuela by 'Dozens of Times'
Also Monday, Rostec's press service said in a statement that The Wall Street Journal had "overestimated the numbers of Rostec staff in Venezuela by several times," and noted that the numbers had actually remained "unchanged for many years."

"As for technical experts, they come to the country from time to time in order to repair previously delivered equipment and provide technical maintenance," Rostec added.

In a recent report, the Wall Street Journal claimed that the alleged withdrawal of Russian advisers was an "embarrassment" for President Nicolas Maduro, and a sign that Russia was weighing "the leader's political and economic resilience against growing US pressure."

Moscow has provided Venezuela with military support in the form of military specialists operating in the country under contracts for the supply of Russian-made weapons systems. The contracts were signed before the start of the political crisis in the country earlier this year, and Russian officials have indicated recently that they have no plans to sign new contracts on the delivery of weaponry to Venezuela at the moment given the financial difficulties the country is in. Venezuela's armed forces are already equipped with a wide variety of modern Russian aircraft, helicopters, armoured vehicles, and air defence systems, including the S-300VM.

© REUTERS / Ivan Alvarado
Brazil 'Uninvites' Guaido's Envoy Amid Reports of Possible Talks With Maduro
Venezuela's opposition, led by National Assembly lawmaker Juan Guaido, has been attempting to carry out a US-backed coup d'état in Venezuela since late January, with Guaido proclaiming himself 'interim president'. The coup attempt received the immediate backing of the US and its Latin American and European allies, while several dozen other countries, including Russia and China, voiced support for the democratically elected government, or urged non-interference in Venezuela's internal affairs at the UN.
...
Reddit
Google+
Blogger
Pinterest
StumbleUpon
Telegram
WhatsApp
771