'What Is Wrong With You?': Farage Slammed Sadiq Khan Over Trump’s Visit (VIDEO) 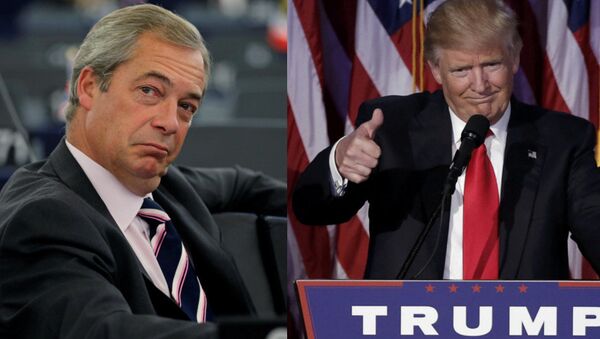 UKIP leader Nigel Farage has slammed Sadiq Khan after the London mayor claimed the UK Government should not "roll the red carpet" out for US President Donald Trump.

Speaking on his LBC radio show, the Brexit Party leader hit back at Sadiq Khan for comparing the language used by Donald Trump to that of the "fascists of the 20th century. Farage responded by saying that, unlike Khan who wants a second Brexit referendum, the American President "at least believes in democracy.”

“We are not directly debating Brexit, but we are debating Trump’s involvement with this debate,” the Brexit Party leader added.

The London mayor claimed it was wrong to roll out the red carpet for the US President, claiming he should not have been allowed a state visit to the UK. However, Farage stressed that it is wrong not to invite the head of another country just because you don’t like his views.

“I didn’t like Obama very much, but I wasn’t gonna suggest he shouldn’t come,” Farage added.

Khan and Trump have been engaged in a long feud since Khan became mayor of London in 2016. Trump challenged Khan to an IQ test after the mayor said the US  president’s views on Islam were “ignorant.” Then, following the terrorist attack on London Bridge and Borough market in 2017, the president accused Khan of “pathetic” behaviour. In July last year, Trump said Khan had “done a very bad job on terrorism.”