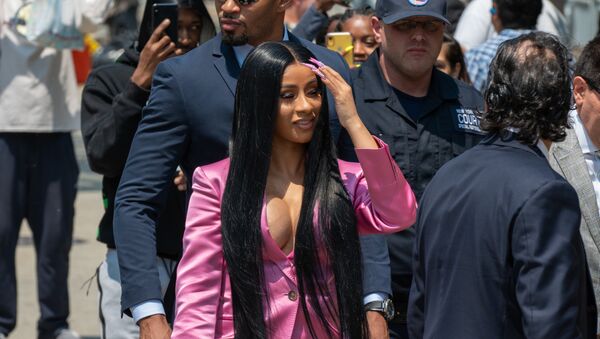 The 26-year-old rapper, who is accused of ordering an attack on two bartenders at a Queens strip club back in August 2018, reportedly rejected a plea deal in mid-April, after her legal team insisted that she hadn't harmed anyone during the incident.

Several hours after dropping a new single, "Press", Cardi B, dressed in all pink, appeared in Queens Supreme Court for the first day of her strip club misdemeanor assault trial on Friday, where prosecutors said that the case would be presented to a grand jury "after further investigation", according to multiple media outlets, including AP and TMZ.

The alleged victims are two bartenders at a Queens strip club, sisters Baddie Gi and rapper 6ix9ine's current girlfriend Jade, who claim Cardi had ordered an attack on them since she believed that Jade had a fling with her husband, Offset, in August 2018.

Viral
Cardi B Goes Completely NAKED on Cover Artwork for New Single 'Press' (PHOTOS)
According to media reports, the Grammy-winning rapper and her crew were involved in a brawl with the women, with Cardi's entourage allegedly "throwing chairs, bottles and hookahs in the club at 3 am". The rapper was purportedly caught on camera tossing an ice bucket at the women as well.

She ultimately surrendered to police and was charged with misdemeanor assault and reckless endangerment.

With a grand jury, Cardi's misdemeanor counts of assault and reckless endangerment could be upgraded to stiffer charges.

In April, she reportedly rejected a plea deal because her attorneys insisted that she had not harmed anyone during the alleged altercation. The offer was to plead guilty to a single misdemeanor, and she wouldn't have to spend time in prison, but would agree to a conditional discharge, per TMZ.

Cardi's next court date has been set for 9 August.