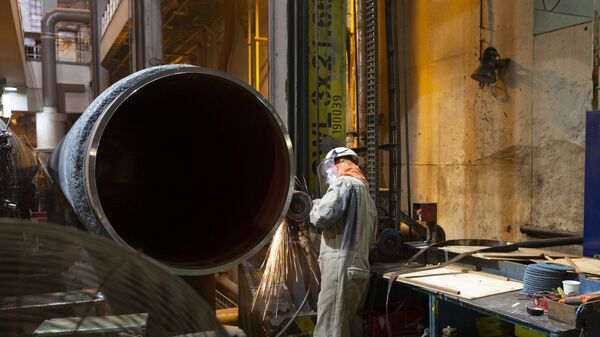 © Nord Stream 2
/
Go to the mediabank
Subscribe
International
India
Africa
MOSCOW (Sputnik) - The CEO of the Austrian oil and gas company OMV, Rainer Seele, has urged the European Union to protect its companies from the United States' ongoing attempts to dictate energy policy and accompanying threats of sanctions over the North Stream 2 pipeline, which will bring Russian gas to Europe once completed.

"I would like to hear whether or not Europe is going to protect the independence of their own countries when somebody else would like to dictate to Europe what kind of energy policy they should follow", Seele told the Financial Times newspaper on Thursday.

Seele pointed out that US opposition to the project was guided by its desire to boost its own LNG deliveries to the continent and had little in common with fair competition.

He also expressed confidence that the current political crisis in Austria, which has led to the dismissal of Chancellor Sebastian Kurz, would not affect the country’s energy cooperation with Russia.

"We have seen different political regimes in place and our experience is quite clear; there was not a single day, not a single minute when we didn’t get the amount of energy we had under contract with Russia, Seele added.

Following his meeting with Ukrainian President Volodymyr Zelenskyy in Kiev last week, US Energy Secretary Rick Perry pledged that a bill on "very, very onerous restrictions" on companies involved in the construction of the gas pipeline would go to the US Congress soon.

The project has been welcomed by some countries in Europe and opposed by the others, who raise concerns over the alleged danger of Europe's dependence on Russia and subsequent diminished transit role of Ukraine. The United States, an LNG exporter, has also been strongly against the project.

In this regard, Russian President Vladimir Putin has voiced the belief that Washington is seeking to force Russia out of the European energy market to sell more liquefied natural gas to Europe. Moscow has also repeatedly reiterated that the pipeline is a purely commercial project.