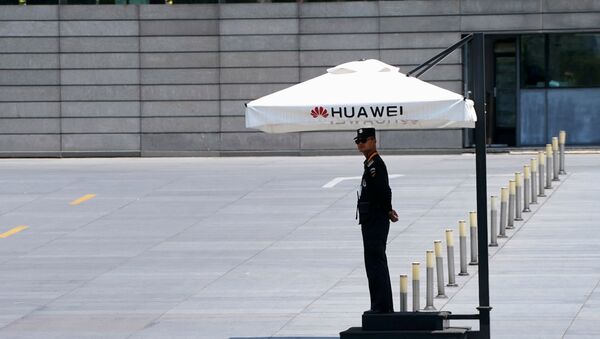 © REUTERS / Aly Song
Subscribe
International
India
Africa
China's Huawei Technologies Co Ltd has filed a motion for summary judgment in its lawsuit against the US government, according to a court filing in the United States, asking to declare the 2019 National Defense Authorization Act (NDAA) unconstitutional.

The motion, filed late Tuesday in the US District Court for the Eastern District of Texas, comes as Huawei attempts to fight the NDAA bill, passed into law by the US Congress last summer, which places a broad ban on federal agencies and their contractors from using Huawei equipment on national security grounds.

The bill cited the company's ties with the Chinese government as the reason for the ban. Huawei has repeatedly denied any connection with the Chinese government, military or intelligence services. The world's largest telecom network gear maker has since faced even greater sanctions as the US commerce department on May 16 put the firm on a trade blacklist that bans companies from doing business with Huawei, in a move which immediately disrupted the global tech sector.

Asia
Beijing Reacts to Huawei Boss' Comments on Apple THIS WAY
Huawei, which has been given a 90-day reprieve from the ban, has denied that its products pose any security threat and protested Washington's attempts to limit its business.

"The US government has provided no evidence to show that Huawei is a security threat. There is no gun, no smoke. Only speculation," Huawei's chief legal officer Song Liuping said in a statement, cited by AFP.

READ MORE: US Pressures Israel to Ban Huawei and ZTE From Its Market — Reports

A motion for summary judgment aims to seek a judge's decision without going to a full trial.
According to the court documents, the Chinese telecom giant has argued that the US bill violates a bill of attainder clause by "singling out Huawei for punishment".

"The judicial system is the last line of defence for justice. Huawei has confidence in the independence and integrity of the US judicial system. We hope that mistakes in the NDAA can be corrected by the court," Song said.

Huawei CEO Sure US Crackdown Not ‘Powerful Enough’ for Everyone to Follow
The filing comes after another lawsuit, filed by Huawei in March, claiming that the legislation barring US government agencies from purchasing the telecoms giant's equipment violated the US constitution. The summary judgment motion seeks to accelerate the legal process to give US customers access to Huawei equipment sooner, according to a statement given by Huawei on Wednesday.

Song added that this is not normal that “politicians in the US are using the strength of an entire nation to come after a private company”  and noted that Huawei’s ban will cut the US off from the 5G race and would not contribute to ensuring cybersecurity.

Commenting on the issue, Francis A. Boyle, professor of international law at the University of Illinois College of Law, said that that Huawei unlikely will succeed on the merits of  this lawsuit  given the legal precedents that are already on the books and now that President Trump has two of his own nominees on the US Supreme Court.

"I suspect the Supreme Court will give him his Huawei Ban. Besides, it is well known here in the United States that Google, Facebook, Twitter, Intel, AT&T, etc. all cooperate with U.S. Intelligence Agencies. Why should Huawei operate any differently?" Boyle said.