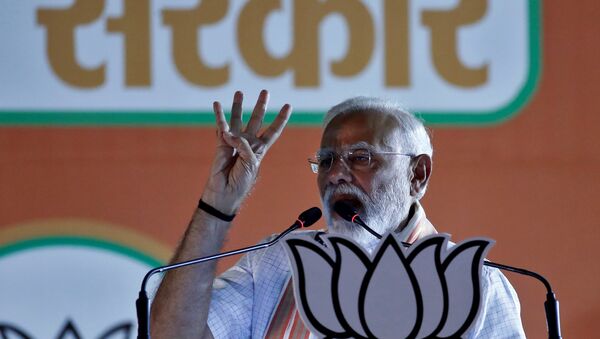 Foreign Minister Shah Mehmood Qureshi says Pakistan’s current relationship with India is not conducive at present to facilitate a visit by Prime Minister Imran Khan to New Delhi. He says that although both leaders have spoken over the phone, there exists a "huge trust deficit" between the two countries.

New Delhi (Sputnik): The Indian government's decision to not invite Pakistan Prime Minister Imran Khan for the 30 May swearing-in ceremony of Prime Minister-designate Narendra Modi in New Delhi has not surprised Islamabad.

He further suggested that the lack of an invite was par for the course, given that Prime Minister-designate Modi had focused his entire campaign during the 2019 general election in India on "Pakistan-bashing".

"It was unwise to expect that he (Modi) can get rid of this narrative [soon]," Pakistan's Dawn newspaper quoted Foreign Minister Qureshi as telling a news channel on Monday evening.

India, Pakistan Continue to Test Weapons Systems Amid Tensions
In a statement issued on Monday evening, India's Ministry of External Affairs (MEA) said that leaders of all member countries of the Bay of Bengal Initiative for Multi-sectoral Technical and Economic Cooperation (BIMSTEC) have been invited for Thursday evening's swearing-in ceremony, to be held in the residence-cum-office of the President of India.

The member countries of the BIMSTEC include Bangladesh, Myanmar, Sri Lanka, Thailand, Nepal and Bhutan. BIMSTEC was created in 1997 as an alternative platform for the integration of South Asia without the presence of Pakistan. It is widely believed that New Delhi under the leadership of Prime Minister Modi has sought to use BIMSTEC more for the geopolitical objective of dealing with Pakistan by highlighting the issue of state-sponsored terrorism and the other allegedly untenable policies of Islamabad.

Meanwhile, speculation is rife that Prime Ministers Narendra Modi and Imran Khan may meet at the Shanghai Cooperation Organisation (SCO) Summit, to be held in the second week of June in the Kyrgyzstan capital Bishkek.

It may be recalled that when Modi became Prime Minister for the first time in May 2014, he had invited leaders of all eight nations who are members of the South Asian Association for Regional Cooperation (SAARC), including Afghanistan, Bangladesh, Bhutan, Nepal, the Maldives, Pakistan and Sri Lanka to the swearing-in ceremony. Pakistan was then represented by former prime minister Nawaz Sharif.