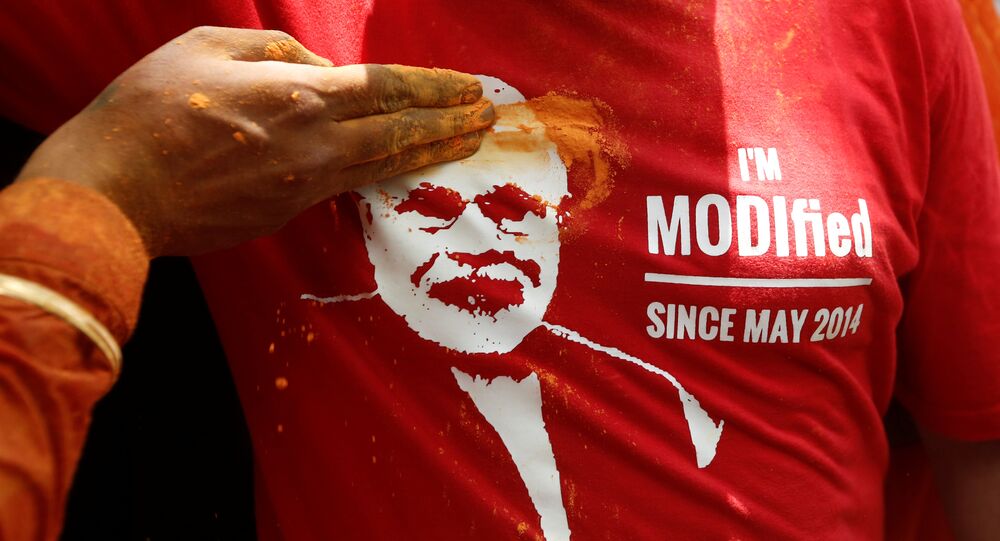 The Bharatiya Janata Party's (BJP) sweeping victory has opened the door to Indian Prime Minister Narendra Modi's second five-year term. Amrita Dhillon, an Indian journalist and founding editor of The Kootneeti, explained the success, giving prognosis on the simmering India-Pakistan conflict and New Delhi's next steps on the international arena.

Indian Prime Minister Narendra Modi's Bharatiya Janata Party (BJP) won by a landslide in the 2019 general election, winning 303 of the 542 seats in the Indian parliament, up from the 282 it had taken in 2014. The Indian National Congress (INC), the main opposition party, got only 52 seats. Amrita Dhillon, the founding editor of a New Delhi-based magazine, The Kootneeti, shed light on the major reasons behind the BJP win, and shared her vision on Modi's policy towards the US, Russia and China and the future of tense India-Pakistani relations.

Sputnik: Was the victory of the Bharatiya Janata Party (BJP) predictable in your opinion? The BJP is described as a right-wing party historically reflecting Hundu nationalist positions. What classes, religious groups constitute the BJP's political base? Did India's "Hindi Belt" played a substantial role in the BJP's win, as it did in 2014?

Amrita Dhillon: Looking at the trends and a weaker opposition, a Modi-led BJP alliance's victory was quite predictable, however, not with such big mandate. Unlike previous elections where Modi who himself in an interview to Reuters stressed on his Hindu Nationalist identity, tried converting the Hindu nationalist vote banks in a nationalist way, which appealed to a majority of votes retaining their faith in his leadership.

© Sputnik / Yuriy Somov
India’s Defence Policy Decisions Will Bear Fruit Over Next Decade - Army Veteran
In addition, if we look at the figures, the BJP's vote share has increased from 31 per cent to 38 per cent and as an NDA alliance from 38 per cent to 45 per cent. Whereas the Rahul Gandhi-led Congress share did not decrease, it was approximately identical to the 19.52 per cent figure in 2014, which stress towards the fact that majority of 100 million first-time voters were leaned towards Modi, who were attracted indeed towards the nationalist approach shown by Modi and his policies on Pakistan and militants in Kashmir.

Contrary to the TIME magazine's jibe on Modi as Divider in Chief, his leadership actually united people and took Indian caste based politics to a different level. Since India's independence, caste dominates the political mandate.

Modi could be seen everywhere talking about India as a whole, without speaking of any specific religion or caste during his entire campaign, which is completely opposite to the opposition's accusation who were branding Modi of dividing people on caste and religion, but who themselves were divided in the name of caste and religion.

For example, Modi's biggest rival in India's largest state Uttar Pradesh were the SP and BSP alliance who were completely relying on their approach towards Dalits and Yadav vote banks. The Arvind Kejriwal-led Aam Aadmi Party (AAP) tried snooping into the votes of Sikhs in Punjab and Christians in Goa. Modi successfully united castes under the umbrella of Hindu Nationalism, composed majority of Hindu voters. However, he and his allies were successful in reaching to other religious sects as well, including Muslims, Sikhs, Christians, Jains, Zoroastrians, and Buddhists etc.

Obviously, the Hindi heartland played an important role in this verdict. Modi, who himself hails from a non-Hindi speaking state, was successful in reaching out to the Hindi-speaking people, putting an idea of strong and united India backed by the idea of nationalism, which is on a peak [the rise] in India.

Sputnik: What's behind the poor performance of the Ghandi-led Indian National Congress in the elections? The party used to be one of the most influential political forces in India. What have happened to it since then?

Amrita Dhillon: Congress seems to have turned into an old unorganised party over these years. Out of 542 seats, Congress was fighting on 423 seats compared to 437 by the BJP, for the first time in history. Their internal opinion poll was limiting them around 150 seats and the organisational strength was low comparing to the BJP. Until the last moment, they were not clear about the alliances and distribution of seats.

They were reliable on the ruling government's mistake to present their candidature. Only criticism and baiting over vote-bank politics will not help to win democratic elections. Modi when arrived in power in 2014, he promoted his Gujrat model of development, which indeed successfully accepted by the voters. On the other hand, being in the power in so many states, Congress failed to boast on their work and highlight their contribution to nation building.

Inside fragmentation is another major reason for the loss, as one of the strongest leaders from North East India, Himanta Biswa Sharma, left Congress to join BJP, as he finds no hopes in Congress leadership. Similarly, one of most influential Congress party's spokesperson, Priyanka Chaturvedi left Congress to join Shiv Sena, a BJP ally in the state of Maharashtra, as she was a victim of inter-party gender-based harassment by Congress workers and leadership's failure surfaced in an attempt to curb the wings of such behaviour.

Another reason includes hurling unnecessary slogans, which ultimately helped BJP getting more seats. Like "Chowkidar Chor Hai" (Watchmen is himself thief) slogan which was later used by all BJP ministers as their Twitter handle prefix, helping them in maintaining a low-profile image.

A weak and directionless central leadership is indeed a concern for Congress.

Sputnik: What impact did the Indio-Pakistani clash over Kashmir have on the elections, in your opinion? Modi's election campaign included vows to 'punish' Pakistan for allegedly supporting the armed rebellion in Kashmir. However, following the BJP's success, Modi and Pakistan Prime Minister Imran Khal exchanged pleasantries. What is your prognosis on the Indo-Pakistani relations following the vote?

Amrita Dhillon: Recent strikes on Pakistan are indeed a big factor, which retained existing voter's faith in the strong leadership, who came into power for their commitments to resist militarily in case of any terror attacks in Kashmir backed by Pakistan and present a strong stand in front of the world, through his proactive foreign policy. Additionally, this influenced the first-time voters who fall in between the age group of 18-24 to vote their mandates for a strong government.

© AFP 2021 / ROUF BHAT
India is Fighting Against Terrorists, Not Pakistani Citizens or Army – Journo
Other than this, the declaration of Pakistan-based Jaish-e-Mohammed (JeM) Masood Azhar as a global terrorist after a repetitive attempt by New Delhi also convinced the voters on the grounds of strong foreign policy and increasing influence at the United Nations (UN).

Seeing the exchange of words between PM Modi and Pakistani Prime Minister Imran Khan on Twitter, we can all hope for a peace dialogue between the two neighbours at a time when in both nations there's a majority government in power,  which rarely happens. In fact, this will be the best time to start negotiating with Pakistan on a lot of pending issues, like Kartarpur Shahib, militancy in Kashmir, and cooperation in trade at the time when Pakistan is on brink of economic failure.

I warmly express my gratitude for your good wishes. I have always given primacy to peace and development in our region. https://t.co/b01EjbcEAw

Sputnik: How will the outcome of the elections affect Modi's policies? What can you say about India's future relations with Russia and the US? What does the future have in store for India-China relations amid Washington's crackdown on Beijing?

Amrita Dhillon: We all can expect an elaborated form of Modi's policies of 2014 in upcoming days. However, the expansion needs to stress on rising unemployment, manufacturing and innovation. Moreover, for the fulfilment of the vision of transformation from a regional to world power then New Delhi needs to make equal relations with the three giants i.e. the US, Russia and China.

© AP Photo / Channi Anand
India Rules out Talks Until Pakistan Takes THIS STEP
India must not compromise with its interest under the influence of sanction-dominated diplomacy. India's ties with Russia are based on multiple pillars of common interests; they share a similar worldview and idea of a multipolar world. However, seeing the upcoming challenges, under the Modi government India will try to explore other avenues of cooperation, beyond defence cooperation, in the areas of outer space, technical grounds, energy and mutual investments. In addition, the government could work on the proposed direct Chennai-Vladivostok shipping lane enhancing the cooperation in the field of natural resources and making it one of the strategic channels in the East.

Amidst the Trump-government's trade war on Beijing, New Delhi needs to find a midway attracting the investments in India, as already due to the high tariffs imposed on China, Japanese and Taiwanese businesses moving to India and other South East Asian countries. A recent high-level advisory group under the Indian commerce ministry proposed reducing the overall tariff to benefit in this situation. Currently, India's average tariff stands at 13.8 per cent. Reducing the tariff will improve the ability of Indian exporters to cooperate with a rapidly evolving global market and attracting more Foreign Direct Investments (FDI).

Amrita Dhillon is the Founding Editor of a New Delhi-based Magazine, The Kootneeti. She is also an honorary Analyst at the Buenos Aires-based Equilibrium Global think-tank.

One dead, 14 Hospitalised in India After Drinking Suspected Contaminated Water