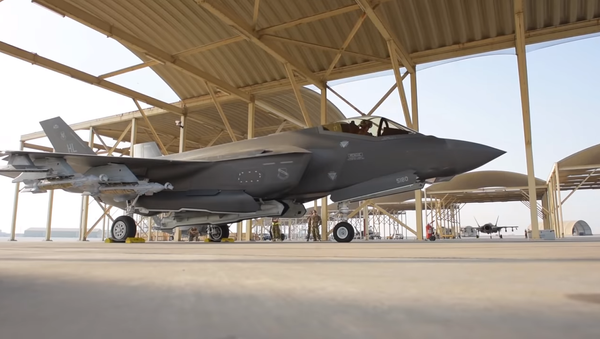 This configuration is also commonly known to pilots as the “beast mode.” It reduces stealth capabilities significantly and is usually reserved to the third day of war and later.

A video uploaded online shows F-35 planes stationed in UAE — right across the Persian Gulf from Iran — taking off carrying a full payload of weapons, known informally as "beast mode" or "bomb truck."

These armed-to-the-teeth sorties are conducted as part of "deterrence missions" in the US Central Command Area of Responsibility, which spans from northeast Africa all the way up to Turkey.

The F-35s stationed in UAE normally belong to Hill Air Force Base in Utah. These are the same planes that have been used in the F-35s' very first strike against Daesh terrorists in north-eastern Iraq earlier this April.

UAE Supports Saudi Arabia's Call for Emergency Summits in Mecca - Ministry
The full payload is often called "third day of war" payload, as the plane with bombs on its external pylons is very visible on the radars. This is contrasted to the "first day of war" payload, where weapons are reserved to the internal bay only, keeping plane visibility to a minimum.

Interestingly, the F-35s currently fly with so-called Luneberg lenses attached to their wings, which are designed to exaggerate the plane's radar footprint in an attempt to feed enemy anti-air systems false information about the plane. In wartime, the lenses are removed, making the plane much less visible, The Aviationist's David Cenciotti explains.

The planes arrived in UAE in mid-April. This is the first deployment of the newest US aircraft in the Middle East.