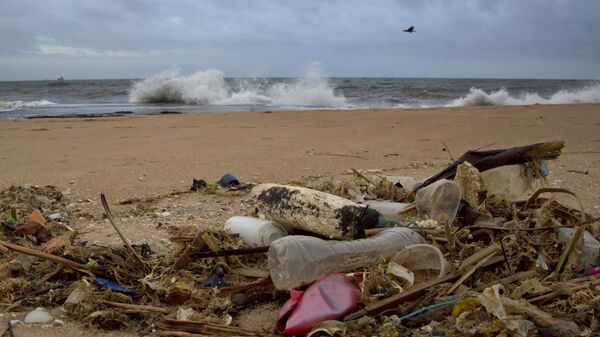 Comprehensive surveys of plastic pollution on Australia’s Cocos (Keeling) Islands has revealed that they are littered with an estimated 414 million pieces of plastic, despite being hailed as “Australia’s last unspoilt paradise.”

A study published May 16 in the journal Nature by Australian researchers reveals that there are 414 million "anthropogenic debris items, weighing 238 tonnes" on the Cocos Island group, a remote territory of Australia in the Indian Ocean consisting of 27 islands. The scientists scanned more than two dozen beaches on seven islands. Of all the identifiable items, around 25% were disposable plastics such as straws, bags and toothbrushes.

"Debris buried up to 10 cm below the surface is estimated to account for 93% (~383 million items) of all debris present on Cocos, the majority of which (~60%) is comprised of micro-debris (2-5 mm)," the study's abstract adds. The findings also suggest that global debris surveys have underestimated "the scale of debris accumulation," emphasizing the need for "effective policy and mitigation" that takes into account buried plastic.

​In an interview, the study's lead author, Jennifer Lavers, noted that "Cocos is literally drowning in plastic, which is really sad considering how incredibly remote these islands are."

"The quantity of debris buried below the surface was so significant," Lavers told the Washington Post. "It ended up accounting for more than 90 percent of the total debris on the island. That's really quite remarkable."

The recent findings come just a couple years after Lavers identified a plastic pollution issue on the remote Henderson Island, a member of the Pitcairn Islands archipelago in the southern Pacific Ocean. An estimated 37.7 million pieces of plastic debris, averaging 671 items per square meter, were found on the uninhabited island. "Henderson shows there's no escaping plastic pollution even in the most distant parts of our oceans," Lavers said at the time, multiple reports state.

​According to Lavers, remote islands are "extremely valuable" to scientists because they paint a "complete picture picture of how much is out there, where it's coming from and the types of problematic items," the Washington Post reported. The recent findings reveal that plastic can accumulate on beaches through ocean currents, wind and waves, even when islands are remotely located.

"What the remote island data collection has shown us is that the quantity of plastics in the ocean is going up, and going up very rapidly," Lavers told the Washington Post.

According to the United Nations, more than 8.3 billion tonnes of plastic have been produced worldwide since the early 1950s. About 60% of all plastic ends up in the environment or in landfills. An estimated minimum of 8 million tonnes of plastic finds itself in the world's oceans on an annual basis, the United Nations Environmental Assembly reports.

​"What Cocos and Henderson show us is that however stunning those numbers are, how alarming they are, it's likely just the tip of the iceberg," Lavers told the Washington Post. "None of those cleanups are digging below the surface."

"The numbers I put forth. . . are undoubtedly underestimates of the true extent of the problem," she added, noting that researchers were unable to access two known debris hot spots.

However, Lavers also ended on a positive note, stating that residents of the Cocos Islands can make small daily changes that positively impact the environment, such as not using plastic straws and shopping with reusable bags instead of plastic ones.