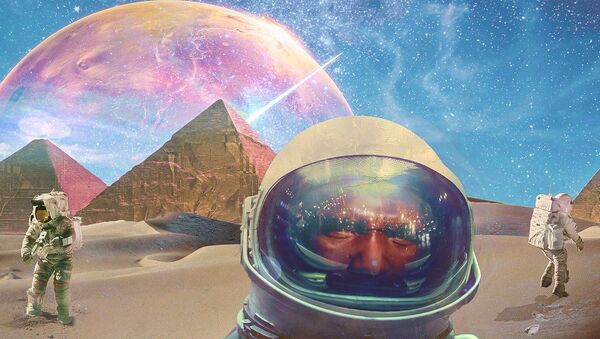 In recent years, humanity’s most brilliant minds have been working to send the first human to the Red Planet. According to physicist Brian Cox, Mars might be the only space travel option for people, destined to become Martians, noting that “we can't stay here forever”.

Professor and presenter Brian Cox has outlined a dismal future for humans aspiring to travel across the universe and step on other planets. The Daily Star reports that the scholar predicted in the upcoming BBC Two show The Planets, tracing mankind's exploration of our solar system that our planet’s closest neighbour, ice-encrusted Mars is “actually the only place” humanity can go beyond Earth.

"In any plausible scenario, there is nowhere else that humans can go to begin their step outwards from the planet, other than Mars. If you think of the other planets, there's none of the others we can land on”, he claimed as cited by the newspaper.

The physicist had no doubts that humans shall leave the planet one day as “we quite can't stay here forever”.

"There may or not be Martians and we need to find out. But there will be Martians if we are to have a future. At some point we will be the Martians”, he noted.

As he earlier revealed, the Red Planet and humanity’s possible destination might have been one of the Earth’s “blue planet” neighbours along with the inhospitable Venus and even Mercury. All three could possibly have had oceans and rivers on their surface, according to the researcher.

Cox and his co-author of the upcoming book release Planets, Andrew Cohen, defined Mars as the likeliest place for life to have evolved.

“Once upon a time the Red Planet was glistening blue. Streams ran down hillsides and rivers wound through valleys”, they noted.

One of the most persistent enthusiasts of Mars travels, multi-billionaire founder of SpaceX and Tesla Elon Musk, earlier revealed that the colonisation of the Red Planet could secure a getaway for the human race in the event of a looming apocalyptic scenario. Speaking at a Q&A session last year he pointed to "some probability" of a new Dark Age, "particularly if there is a third world war”.

According to him, his project aims at keeping “enough of a seed of human civilisation somewhere else to bring civilisation back”.

"I think a moon base and a Mars base that could perhaps help regenerate life back here on Earth would be really important”, Musk noted then.