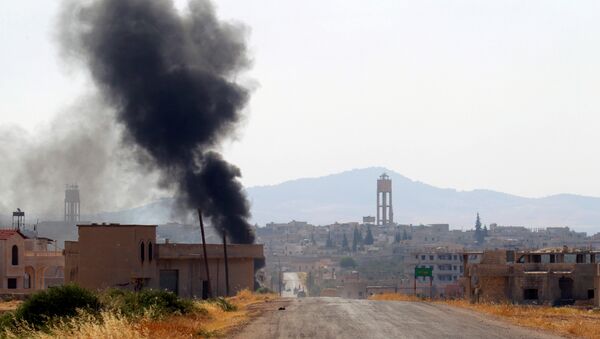 © REUTERS / Ammar Abdullah
Subscribe
International
India
Africa
MOSCOW (Sputnik) – Militants have violated the ceasefire in the Syrian provinces of Hama and Latakia over the past 24 hours, the head of the Russian Defence Ministry's Centre for Syrian Reconciliation, Maj. Gen. Viktor Kupchishin, said on Monday.

"Over the past 24 hours, militants shelled… settlements in the Latakia province and… the Hama province", Kupchishin said at a press briefing.

Militants have reportedly intensified attacks on settlements in northwestern Syria. The government forces, in turn, started targeting terrorists in Idlib, which remains their last stronghold in Syria.

Kupchishin noted that within last 24 hours the reconciliation centre had held a humanitarian action in the province of Hama, with local residents having received 1,000 food kits.

Putin, Erdogan Discuss Ceasefire Violations in Syria's Idlib - Kremlin
Kupchishin added that on Sunday 208 refugees had left the US-controlled Rukban camp, with the total number of people who left the facility had reached some 13,000.