'Chuck Norris vs Tank' at US Military Base Triggers Meme Eruption (PHOTO, VIDEO) 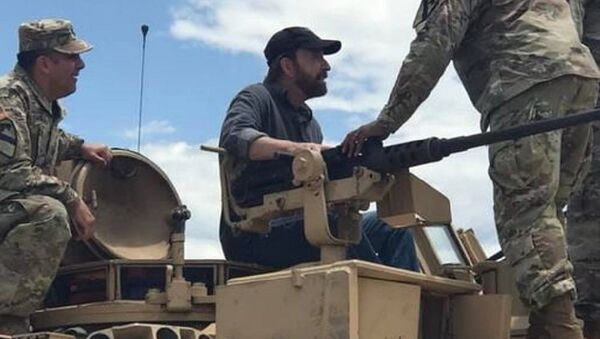 © Photo : 1st Cavalry Division/twitter
Subscribe
International
India
Africa
The new documentary Chuck Norris hosts is expected to air in July and will involve some of the military personnel the action movie hero met during his tour of the military installation.

Legendary Hollywood star and action movie hero Chuck Norris has stirred up quite a storm online after he visited the Fort Hood military base in Texas, mingling with the personnel stationed there and getting a close and personal look at an M1A2 Abrams main battle tank.

According to Killeen Daily Herald, Chuck was also accompanied by a film crew as he is hosting a documentary series scheduled to be aired in July, which will include some of the soldiers he met during the visit.

This afternoon, #IRONHORSE Troopers from 2-8 CAV had the honor to work with THE Chuck Norris. He came to Fort Hood to film a show that will feature the M1A2 Abrams tank. It was our pleasure to host this production. We’ll keep you posted when the episode will air! #LiveTheLegend pic.twitter.com/qAIKg2Is62

News of this development, coupled with the image of the martial arts icon atop an armoured vehicle, have, perhaps predictably, elicited a fresh barrage of “Chuck Norris jokes” online.

The M1A2 Abrams added a new weapon to its arsenal. @1stCavalryDiv rolling out with a roundhouse kick. pic.twitter.com/oe6DlbpeCL

Chuck Norris is not sitting on that M1A2 tank. The tank is sitting under him. https://t.co/p6j5CpJdOk

This occasion, however, apparently drew the attention not only of Chuck Norris’ fans but also his detractors.