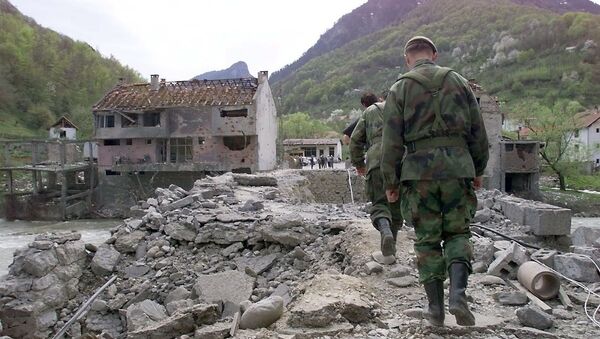 © AFP 2021 / ALEXANDER NEMENOV
Subscribe
Aleksandra Stanic - Serbia is planning to carry out scientific research on the effects of the 1999 NATO campaign in Yugoslavia and to prove that there's a connection between the deplorable public health trends and the damage caused by NATO bombs.

According to Serbian oncologists, the number of cancer patients in the country is on the rise, and the mortality rate among them is increasing. The situation with infertility, autoimmune diseases, and mental disorders in Serbia is also alarming.

"Twenty years after the bombing of Yugoslavia, we are seeing an increase in oncological diseases, primarily systemic ones, such as lymphomas and leukaemia, and then solid cancerous tumours. And the most tragic thing is that, compared with the European average, we have 2.5 times more children with cancer".

This is what a nation's "medical record" looks like two decades after NATO's "humanitarian operation" against the Federal Republic of Yugoslavia (FRY), according to Professor Danica Grujicic, PhD, Head of the Neuro-Oncology Department at the Clinical Centre of Serbia. Cancer, however, is not the only issue on the rise.

"The second problem is autoimmune diseases. Today, there isn't a free spot at the Clinic of Allergology and Immunology. It wasn't like that before",  Professor Grujicic told Sputnik. In addition, according to Grujicic, the situation with infertility became worse after the country was bombed.

"We have a 100% increase in male infertility. If before you took 100 couples who were receiving infertility treatment: in 40% of the cases there was a problem with the woman, in 20% with the man and in 40% it was not clear what the problem was. Today — 40% are issues with women, 40% with men, and in another 20% the cause is unknown", she explained.

In Serbia, 20,000 people die from cancer every year and more than 30,000 people fall ill. More than 60 million euros a year are spent on drugs for cancer patients in Serbia, while six years ago 9.6 million euros was allocated. This is shown by data published by the Serbian Cancer Society on the basis of information from the Republican Statistical Agency and the Institute of Public Health of Serbia "Dr. Milan Jovanovic Batut".

The percentage of cancer deaths is one of the highest in Europe, which is partly a consequence of the bombing, according to oncologist Slobodan Cikaric from the Cancer Society.

"For solid tumours that make up 95% of all cancers, they are lung cancer, breast cancer, prostate, brain, intestinal cancer, gynaecological tumours, etc., the latent period ranges from 10 to 30, even 30 years. Which means it's not even over yet. The effects of depleted uranium can last for another 10 years", the expert said.

How Did NATO's Campaign in Yugoslavia Change the Alliance?
According to psychologist Zarko Trebjesanin, who worked with children during the bombing, the mental state of many Serbs also changed after the NATO aggression. About 8.8% suffer from the post-traumatic stress disorder.

A study among the civilian population revealed a significant number of mental and psychological problems that are a direct consequence of the bombing.

"It is indicative that 10-15 years on we see a large increase in the intake of sedatives, which makes it clear how gravely people are traumatised. Of course, I do not think that there's an increase only here, but perhaps here it's growing more intensively. We see a large number of people who are constantly in a state of nervous excitement or in complete apathy", Trebjesanin explained.

The cause-effect relationship of the bombings and the growing rate of certain illnesses among Serbs is now being investigated by a coordinating body under the patronage of the Ministry of Environmental Protection of Serbia that was formed almost a year ago (12 June 2018 — Sputnik).

All types of specialists — physicians, chemists, military experts will be engaged in collecting and analyzing historical and field data. Studies will be carried out in accordance with recognised international methodology, and whether they will become the basis for filing a lawsuit against NATO — this decision remains with the authorities.

Neurosurgeon Danica Grujicic is certain that it is Serbia's duty to all mankind and other countries affected by the Alliance's aggressive invasions to investigate the consequences and prove their link to the bombing, including the use of depleted uranium:

"Serbia is the only country that can do this; neither can poor Libya, nor Syria, nor Iraq, nor Afghanistan. So, we have to do this for the whole world, to show what a crime it is. After all, they deliberately bombed all these targets, that were marked as high risk on the map. That is, you know that you are causing an environmental disaster and still bombing. Wait, it's genocide! NATO is a genocidal organisation!"

000000
Popular comments
Serbia should've researched this a lot sooner, but better late then never i guess. So much sadness over the terror bombing of the Serbs back then & sadly the perpetrators will probably never be punished fo it.

Dungeon Ambassador from Terra
16 May 2019, 15:31 GMT4
000000
americas final solution is to destroy the gene pool of countries it does not like. look at iraq, afghanistan, syria, yugoslavia. its a crime against humanity that will go on killing for centuries until the whole population is dead
Sealark
16 May 2019, 15:50 GMT4
000000
Newsfeed
0
New firstOld first
loader
LIVE
Заголовок открываемого материала
Access to the chat has been blocked for violating the rules . You will be able to participate again through:∞. If you do not agree with the blocking, please use the feedback form
The discussion is closed. You can participate in the discussion within 24 hours after the publication of the article.
To participate in the discussion
log in or register
loader
Chats
Заголовок открываемого материала
Worldwide
InternationalEnglishEnglishMundoEspañolSpanish
Europe
DeutschlandDeutschGermanFranceFrançaisFrenchΕλλάδαΕλληνικάGreekItaliaItalianoItalianČeská republikaČeštinaCzechPolskaPolskiPolishСрбиjаСрпскиSerbianLatvijaLatviešuLatvianLietuvaLietuviųLithuanianMoldovaMoldoveneascăMoldavianБеларусьБеларускiBelarusian
Transcaucasia
ԱրմենիաՀայերենArmenianАҧсныАҧсышәалаAbkhazХуссар ИрыстонИронауОssetianსაქართველოქართულიGeorgianAzərbaycanАzərbaycancaAzerbaijani
Middle East
Sputnik عربيArabicArabicTürkiyeTürkçeTurkishSputnik ایرانPersianPersianSputnik افغانستانDariDari
Central Asia
ҚазақстанҚазақ тіліKazakhКыргызстанКыргызчаKyrgyzOʻzbekistonЎзбекчаUzbekТоҷикистонТоҷикӣTajik
East & Southeast Asia
Việt NamTiếng ViệtVietnamese日本日本語Japanese中国中文Chinese
South America
BrasilPortuguêsPortuguese
NewsfeedBreaking
19:07 GMTMan Kills His Elderly Grandfather With Axe After 'God Told Him to Do it,' Media Says
19:03 GMTFrench Presidential Hopeful Slammed for Waving Gun at Journalists
19:01 GMT‘No Business Being There’: Meghan McCain Revisits Rage at Ivanka, Jared for Attending Dad’s Funeral
18:48 GMTAfghan-Pakistan Border 'Equally Unstable' as LOC, Will 'Come & Bite Them', Warns Indian Army Chief
18:46 GMTTrump's New Social Media Platform 'TRUTH' Hacked By Pranksters
18:39 GMTRape Case Involving Afghan Man Prompts Leaders to Call for Halt to Resettlement in Montana
18:38 GMTExplosion at Power Plant Causes Major Blackout in Afghan Capital
18:35 GMTIs Zuck Stuck? Facebook Facing New Challenges & Rebranding Unlikely to Save the Day, Observers Say
17:55 GMTGerman Defence Chief Warns Europe Against ‘Detaching From America’ & NATO in Wake of Afghan Debacle
16:52 GMTEMA Says Sputnik V Still Under Review, Gives No Comments on Assessment Timeline
16:41 GMTPutin Calls NATO Military Presence in Ukraine a Real Threat to Russia
16:25 GMTBiden Was Right to Withdraw US Troops From Afghanistan, Putin Says
15:52 GMTUK’s Johnson Calls for 'Fast' Solution to Issues With N. Ireland’s Post-Brexit Protocol
15:40 GMTPutin Calls COVID-19 Pandemic Another Reminder of How Fragile Global Community Is
15:37 GMTPentagon: US Army, Navy Hold 3 Successful Tests in Bid to Advance Hypersonic Weapons' Development
15:33 GMTScottish Power Boss Slams 'Regressive' Price Cap, Warns of Energy Supplier 'Massacre' in UK
15:33 GMTEpstein's Ranch Had Computer Rooms 'The Size of Houses' to Spy on Guests, Claims Alleged Victim
15:32 GMTWHO Studying Sweden's, Denmark's Data on Side Effects of Moderna Vaccine
15:25 GMTPutin: Battle for Equal Rights in West Turning Into Dogmatism Bordering on the Absurd
15:23 GMTPutin & Xi Give Boris' PR Summit a Miss