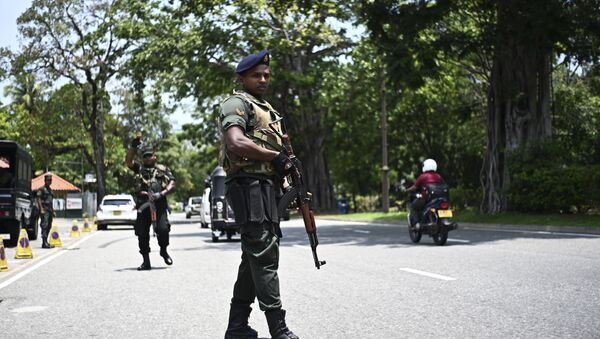 © AFP 2023 / Jewel SAMAD
Subscribe
International
India
Africa
Under the agreement, Sri Lankan customs could neither inspect American service personnel nor their baggage, and they would be allowed to export goods bought in Sri Lanka to the US without being questioned.

New Delhi (Sputnik): Sri Lankan Army Commander Lieutenant General Mahesh Senanayake has opposed the Status of Forces Agreement (SOFA) with the US, according to a Sri Lankan media report.

Lieutenant General Senanayake has termed the agreement as a lop-sided treaty with the US which "undermines" domestic laws and tax regimes without reciprocity from the US. He said that he would not agree for the agreement, reports News 1st, a Sri Lankan news outlet, reported.

'Foreign Mastermind' May Have Planned The Sri Lanka Easter Bombings - President
According to the army chief, many regional and world powers are vying to gain a foothold in the island country and take advantage of the current situation because of the strategic and geographical importance of the nation, the media report said.

"How can we sign such an agreement? We can't agree to what is stated in it. That is like committing suicide after writing all my properties to someone else", he said.

According to media reports, criticism has been voiced by various political parties and other stakeholders over the signing of SOFA. Opponents say that the agreement will pose a severe threat to the country's sovereignty.

The general opinion is that SOFA contains clauses that undermine domestic laws and tax regime without any reciprocity from the other party.

The government's political opponents have said that Washington had asked for all its military personnel that are to be stationed in Sri Lanka be under the jurisdiction of US law, and to be exempt from Sri Lankan taxes.

According to media reports, the Sri Lankan government is considering signing the SOFA agreement with the US, with the planned move inviting strong criticism from opposition parties and other stakeholders who consider that, if signed, the agreement will pose a severe threat to the country's sovereignty.