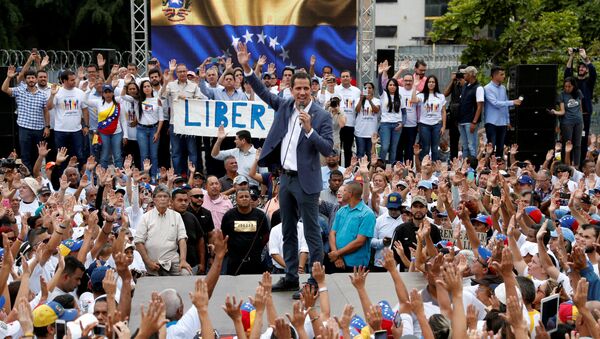 © REUTERS / Carlos Garcia Rawlins
Subscribe
WASHINGTON (Sputnik), Michael Hughes - US media outlets have been trying to manufacture consent for regime change in Venezuela because they are beholden to corporate shareholders and aligned with the opposition’s neoliberal agenda, analysts told Sputnik.

On the morning of April 30, media outlets across the globe, based on disinformation from opposition leader Juan Guaido and US officials, reported that a widespread military insurrection was underway, senior Venezuelan leaders had defected, and President Nicolas Maduro was on the run. However, by the end of the day it became apparent that none of the reports were true.

READ MORE: Bolton Pledges US Will Sever Ties Between Cuba and Venezuela

The following day hundreds of thousands of Venezuelans marched in support of Maduro, not an image of which could be found in any major mainstream news source because most Western journalists chose instead to exclusively cover Guaido’s much smaller rally.

In the wake of last week’s failed coup attempt, the Western propaganda campaign could escalate as Guaido steps up efforts to build support for a US military intervention. There is a preponderance of empirical evidence and quantifiable metrics to support the charge that the US media has been biased towards effecting regime change in Venezuela — especially since Guaido declared himself interim president in late January.

The Fairness & Accuracy in Reporting (FAIR) watchdog group analysed a sample of 76 op-ed pieces and TV commentator segments about the Venezuela crisis that major US media outlets ran from mid-January to mid-April. The FAIR survey, released last week, found that 86 percent of the articles and segments supported regime change, 14 percent took no position, while zero percent opposed the notion of ousting Maduro.

The New York Times has played a leading role in manufacturing consent for the coup. On January 24, the Times editorial board called on the international community to pressure Maduro into fleeing abroad. In April, the Times failed to disclose that the narrator of a 5-minute anti-Maduro op-ed video was the daughter of Guaido adviser Ricardo Hausmann, a former planning minister who helped run Venezuela’s central bank in the pre-Chavez era.

Caracas Strips 7 Venezuelan Lawmakers of Immunity Over Failed Coup - Reports
Many mainstream media outlets have repeatedly churned out unbalanced stories that blame the crisis solely on Maduro while neglecting the role of US sanctions. For example, the media has largely ignored a new study — co-authored by leading economist Jeffrey Sachs — that says US sanctions have already killed 40,000 people in Venezuela.

US journalists also continually push the Trump administration allegation that socialism destroyed Venezuela’s economy without providing any information from the other side, such as the fact that from 1999 to 2013 then-President Hugo Chavez’s socialist programs were applauded for reducing poverty, eradicating illiteracy, lowering unemployment, boosting GDP, and improving access to healthcare.

Jim Naureckas, an editor at FAIR, pointed out how mainstream coverage of situations like the Venezuela crisis tend to align with government objectives.

"If you want to predict the US corporate media's stance on an international issue, the best indicator is to look at the US State Department's position — overwhelmingly, they are the same", Naureckas said.

Teri Mattson, the Program Director of the Intrepid News Fund, which promotes and funds independent journalism in Latin America, said that the media coverage does not reflect reality on the ground.

"The Bolivarian Revolution has been under siege by the US media since Chavez was elected", Mattson said. "This media campaign was amplified when Maduro was first elected and even more so since Trump was elected".

Mattson, who is currently living in a politically mixed, working class barrio not far from downtown Caracas, said that US intervention is certainly not desired and threats from President Donald Trump have made people "Venezuelan First."

"The population… has moved, at least for this moment, beyond who is president and is more focused on preserving national sovereignty as well as natural resource sovereignty," Mattson said.

Mattson also wondered what type of leader Guaido would be even if he did take control.

"What type of 'president' would call for the foreign intervention of his own country and the murder of his own people?" Mattson asked.

Americans should come visit and see for themselves, Mattson recommended, because US citizens have been conditioned into believing anything happening in Venezuela is "bad" and suffer from non-engagement. And US citizens will remain non-engaged as long as US troops are not involved.

"The people here [in Venezuela] are strong and resilient and have a very sophisticated understanding of foreign and domestic politics. The people have a voice that needs to be heard", Mattson said.

One of the leading American philosophers of the twentieth century, John Dewey, warned that whoever owns the means of production, publicity, and communication "rules the life of the country." His observation is quite prescient given the current state of the US media industry wherein five corporations control most of the mainstream news outlets, according to Fortune magazine.

Moreover, the Global Critical Media Literacy Project in 2016 reported that many of the same executives holding board positions at US corporate media companies also serve on the boards of the world’s largest energy companies.

Meanwhile, Guaido has promised to privatize Venezuela’s oil industry and open it up to American corporations. Mattson said that White House National Security Adviser John Bolton has been clear about US and international corporations exploiting natural resources in Venezuela — which happens to have the world’s largest proven oil reserves.

"It's important to understand natural resource sovereignty and the role of transnational corporations here in Venezuela. John Bolton has been overt about this. These same transnationals own the US media, or at least some of the individuals overlap. So the narrative in the US is highly ‘curated’", Mattson said.

Glasgow University Media Group member Alan MacLeod, author of "Bad news from Venezuela" and "Propaganda in the Information Age," told Sputnik that large corporate media outlets like CNN and the New York Times exist to represent the views and interests of their owners and advertisers. The owners are rich corporate shareholders and most of the advertisers are multinational corporations, he observed.

"Their interests are fundamentally opposed to progressive or socialist governments — especially those who control the world’s largest reserves of crude oil", MacLeod said. "Liberal Western journalists don’t challenge their government on foreign policy because they agree almost completely with what Trump is doing".

MacLeod said another factor to consider is the background and ideology of the journalists on the ground, who actually actively support the opposition.

"News from foreign countries like Venezuela is produced by a very small group of Western journalists, pre-selected from the upper-middle classes who generally see the world in exactly the same way as the US government. Inside Venezuela, these journalists rarely venture out of the wealthy, gated communities they live in and are almost completely reliant on sources from their own government for news on Venezuela. Therefore, they come to see themselves as part of a ‘resistance’ against Maduro, as they themselves openly told me", MacLeod explained.

READ MORE: US to Increase Pressure on Venezuela, May Try to Kill Maduro – Ex-UN Rapporteur

Naureckas echoed MacLeod’s sentiments that sympathies of elite Western journalists tend to lean toward Guaido and his vanguard.

"In the particular case of Venezuela, I think a secondary factor is that support for the government and the opposition breaks down strongly along class lines — with the wealthier strata, including the educated professionals that foreign reporters are likely to associate and identify with, mostly in the opposition camp", Naureckas said.

MacLeod raised yet another factor that is driving the propaganda campaign. The media analyst suggested that the conflict in Venezuela is larger than simply a battle between capitalism and socialism, and with stakes so high objective news reporting apparently becomes expendable.

"Venezuela is ground zero in the war between a US-led order and a more multipolar world. And in war, truth is always the first casualty", MacLeod concluded.

000000
Popular comments
Haussman...venezuela...are the zionists involved in the attempt coup in venezuela? It seems much clear now

kuzulu
9 May 2019, 00:54 GMT2
000000
. An excellent article. We need more of such write-ups that delves into the sociological background of the clashes between the hegemon club and the resistance movements that are fighting the corporatocracy. Can we also have another article exclusively on how western MSM have become corporatists and are continuously conspiring along with the corporates to destroy the just societies and the just nations around the world that don't pay obeisances to the corporates?