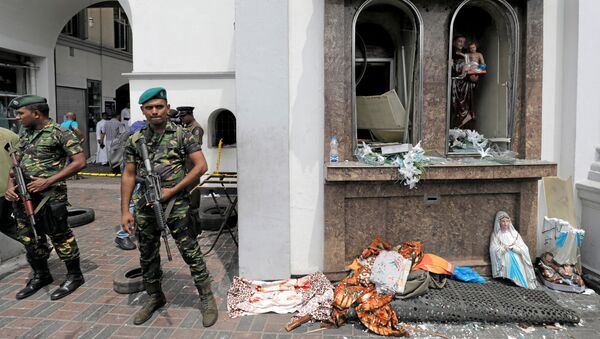 Police spokesman Ruwan Gunasekera has reportedly said that around 500 people were wounded in the blasts, adding that 40 people were now under arrest in connection with the attacks, which Sri Lanka's government has blamed on the local Islamist group National Thowheeth Jamaath.

Reuters has quoted a number of sources as saying that Sri Lankan police have detained a Syrian national for questioning over the Easter Sunday attacks.

“The terrorist investigation division of the police arrested a Syrian national following the attacks for interrogation. He was arrested after an interrogation of local suspects,” the sources said.

The remarks came after police said that the number of people killed in a series of deadly suicide bomb attacks in Sri Lanka on Sunday had risen to 310, a figure that included several people who died of their injuries overnight.

According to previous reports, 290 people were killed and 500 were injured in the explosions.

The  local media outlet News 1st reported that the number of those wounded in the attacks now stands at 480.

Meanwhile, three minutes of silence have been observed across Sri Lanka to pay tribute to all those who were killed in Sunday’s terrorist attacks, as part of a full day of national mourning on Tuesday.

This comes after Sri Lankan Economic Reforms and Public Distribution Minister Harsha De Silva told CNN that the Sunday attacks were not a flop of the country's intelligence services but a failure to circulate information internally to people capable of taking action.

Earlier, Sri Lanka's Health Minister Rajitha Senaratne said that the bombings had been organised by the local group National Thowheed Jamaath (NTJ) and that they had been carried out with help of a vast international network.

Sri Lanka's Easter Attacks Highlight the Ongoing Persecution of Christians
Eight explosions took place in Sri Lanka on Easter Sunday; three churches and three hotels were targeted. Taken together, these constituted the worst attacks to have happened in the country's modern history, exceeding even the most notorious terror attacks of the country's 25-year civil war, which ended in 2009, in terms of civilian loss of life.

A massive security operation was launched following the attacks; at least 24 people have already been detained in connection with the bombings. Sri Lanka’s authorities introduced and re-introduced curfews, deploying an extra 1,000 troops in the capital Colombo.