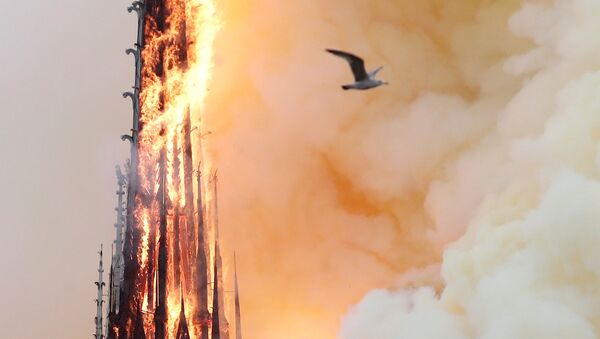 "It might sound kind of cynical on my part, but for politicians, it seems like all disasters can be used for potential political gain," Mercier told hosts John Kiriakou and Brian Becker.

​The Notre Dame Cathedral, one of Paris' most widely recognized landmarks, was engulfed by flames Monday evening. The fire is believed to have started accidentally during renovation work underway inside the cathedral. The UNESCO World Heritage site, built between the 12th and 14th centuries, has been the site of royal marriages, coronations and farewell ceremonies for prominent French officials over many centuries, and is a prime example of French gothic architecture, Sputnik previously noted.

Following the blaze, Macron addressed the French people in a short televised speech.

"This is not the time for politics," he said.

"I profoundly believe that it is up to us to transform this catastrophe into an opportunity to come together and think about what we were and what we need to become, to improve ourselves," the president added, alluding to a series of measures he plans to outline in response to the wave of so-called Yellow Vests rallies. The protests, which started in France in mid-November 2018 and were triggered by Macron's proposal to raise fuel taxes, have been marked by violence, clashes with law enforcement agents and public disorder.

"I will get back to you as I had promised in the coming days, so we can collectively act together after the great debate, but now is not the time," he added.

"After the time of hardship, the time of reflection and action will come, but let's not mix them up; let's not fall in the trap of precipitation… being head of state [is not] just administering things, [it is] being conscious of our history. It is up to us now to rediscover the thread of our national project — what made us, what unites us," he continued.

"It's kind of an emotional [time], and Macron is using it to create a mood of national communion, if I may say, especially appropriate in the context of Notre Dame being a church," Mercier said.

"It [the fire] has been very useful for Macron, and I have to say this is clever… he is trying to stage [a show] of national unity. It's almost like 9/11 in the US. It's a shock, and the psychological shock is understandable, as Notre Dame was kind of a symbol of resilience and stability, a symbol of something [that has withstood time]. It's kind of almost a metaphor of human frailty," Mercier added.

According to Becker, former US President George W. Bush's approval rating went to 90 percent after the September 11, 2001, terrorist attacks.

"And I tell you tonight with force, we are this people of builders," Macron said, according to a translation by NBC News. "We have so much to reconstruct. So yes, we will rebuild the Cathedral of Notre Dame more beautifully. And I would like it to be achieved in five years from now. We can do it. And we will mobilize," he added.

However, according to Mercier, it may be impossible to rebuild the Notre Dame.

"The notion that it's going to be rebuilt and it will be exactly the same is completely false. I'll give you an an example. The [intricate] woodwork… it was all made of oak… It took 80 acres of natural oak trees [to build Notre Dame]. And such oak trees have completely disappeared from France, so it will not be rebuilt because it cannot be rebuilt."

"They are using that as a public relations (PR) operation and will also be, for them, a tax write-off," Mercier added.

000000
Popular comments
More likely than not, Macron had ordered the fire .