‘Doing What He Loved': US Man Killed by ‘World's Most Dangerous Bird' 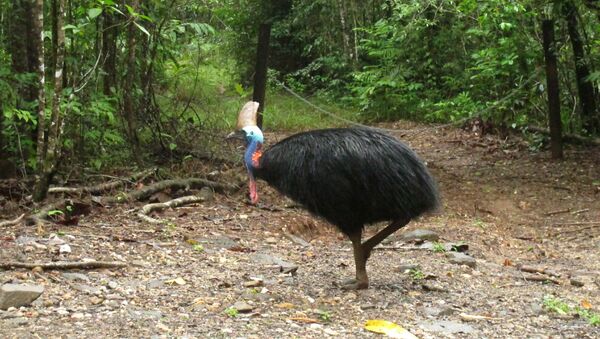 Marvin Hajos, a 75-year man who raised animals and exotic birds on his farm near Alachua, Florida, was killed on Friday by a cassowary, a large, flightless bird considered to be one of the world's most dangerous fowls.

Local media reports indicate that Hajos was attacked by the cassowary after he stumbled onto the ground, likely startling the bird and sending it into a defensive mindset.

"It looks like it was accidental," Alachua County Fire Rescue Deputy Chief Jeff Taylor told the Gainesville Sun. "My understanding is that the gentleman was in the vicinity of the bird and at some point fell."

"When he fell, he was attacked," he added.

First responders were notified of the incident at roughly 10 a.m. local time. Hajos was transported to UF Health Shands Hospital, where he later succumbed to his injuries. "Our crews worked very hard to give the victim the best chance possible at survival," Taylor told USA Today.

The Alachua County Sheriff's Office has since opened up a death investigation. According to the Sun, another bird was spotted on the grounds on Saturday. However, it's unclear if it participated in the attack.

A woman who identified herself as Hajos' fiancee told the publication that her partner was "doing what he loved."

Cassowaries, of which there are three species, are native to the tropics of New Guinea and Queensland, Australia. A relative of the emu, rhea and ostrich, the cassowary has a distinctive look, as its body is covered in two-quilled black feathers and has a wattle, a fleshy pouch of skin that hangs from its neck, that varies in color, being blue, red, purple or white.

All three species also have a casque on the tops of their heads, which is made up of keratin.

But none of these characteristics are what make the bird so dangerous.

"The cassowary is rightfully considered the most dangerous bird in the world," writes the San Diego Zoo. "Each three-toed foot has a dagger-like claw on the inner toe that is up to 4 inches (10 centimeters) long! The cassowary can slice open any predator or potential threat with a single swift kick."

In 2012, Dennis Ward, an Australian man vacationing in the country's Babinda Boulders, learned first-hand the dangers of the cassowary when one decided to pick on him during a photoshoot.

"We were standing about 40 or 50 feet away from the cassowary… It looked like it was going to attack the photographer, then next moment it charged towards me and my grandson," he told the Cairns Post.

"It just came straight up to me, decided to pick on me for some reason, I don't know what for… It was looking right at me, kind of standing up, so I turned my back to it because I didn't want a claw right up my middle."

"Next thing, thump, I copped a boot in the back, and I was tumbling down the bank," he added. Ward fell down about seven feet before hitting a ledge towards the bottom of the cliff.

The Florida Fish and Wildlife Conservation Commission lists the cassowary as a Class II species which can "pose a danger to people." It adds that owners must have a permit and meet the agency's "specific cage requirements" in order to house the bird.