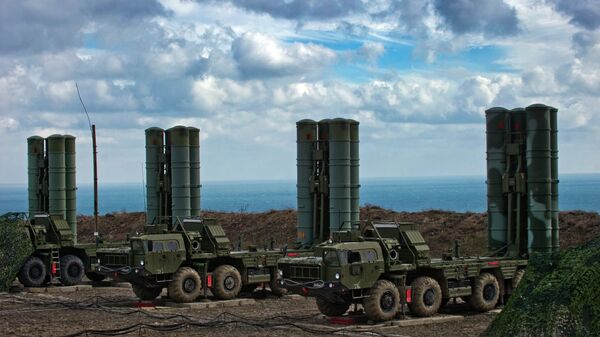 © Sputnik / Sergei Malgavko
/
Go to the mediabank
Subscribe
International
India
Africa
The United States has been trying to talk Turkey out of purchasing Russia-made S-400 air defence systems by threatening to halt F-35 supplies and impose economic sanctions, but Ankara has seemingly remained unfazed, refusing to change its mind.

With Turkey’s determination to go ahead with the acquisition of S-400s from Russia, State Department Deputy Spokesperson Robert Palladino listed several risks on Thursday that the NATO ally may face.

“I think we’ve been pretty clear from here, from the Department of Defense, that there are risks associated with the acquisition of the S-400. We’ve talked about them often. I mean, number one, pending a Turkish decision to unequivocally forgo delivery of the S-400, immediate impact is that deliveries and activities associated with the stand-up of the F-35’s operational capabilities, they’ve been suspended”, Palladino told reporters.

The deputy spokesperson then cited US Vice President Mike Pence, who said, “We will not stand idly by while NATO allies purchase weapons from our adversaries”, to stress that Washington has warned Ankara of consequences, loud and clear:

“We have clearly warned Turkey that its potential acquisition of the S-400 will result in a reassessment of the F-35 program. Third, we have spoken often that this also increases the risk – could lead to potential actions under Countering America’s Adversaries Through Sanctions Act. That involves any entity engaged in such a significant transaction. And finally, we have looked at the risk – if Turkey were to acquire the S-400, it runs the risk of not receiving the Patriot air and missile defense systems. So these are clear risks that we’ve discussed at length and continue to exist”, he concluded.

World
'US Must Choose': Turkey Hits Back at Pence With Own Ultimatum Amid S-400 Row
At the same time, Palladino dodged a question whether Turkey’s position in NATO may be shattered with the acquisition of S-400s, simply stating, “I’ve got nothing further at this point”.

Palladino’s remark comes just a few days after Turkish President Recep Tayyip Erdogan reiterated that the purchase of S-400s from Russia was a done deal.

Turkish Foreign Minister Mevlut Cavusoglu, for his part, said earlier this week that it was absurd to question Turkey’s NATO membership over the S-400 deal and made it clear that Ankara would not give in to Washington’s pressure.

“If the United States does not want to sell us the Patriot [interceptors], then tomorrow we can purchase the second S-400 battery, and we can also buy other missile defence systems”, he said.

In a parallel development, the US Senate Foreign Relations and Armed Services Committees have yet again warned of imminent sanctions on Turkey and urged Ankara to make a choice.

“By the end of the year, Turkey will have either F-35 advanced fighter aircraft on its soil or a Russian S-400 surface-to-air missile defence system. It will not have both”, Republican Senators Jim Risch and Jim Inhofe along with Democratic lawmakers Bob Menendez and Jack Reed penned in a New York Times article.

US Couldn't Offer Turkey Same Conditions on Patriot as Russia on S-400 - Erdogan
Washington has on a multitude of occasions threatened to introduce sanctions against Ankara under the Countering America’s Adversaries Through Sanctions Act (CAATSA), a 2017 law drafted in response to Russia’s alleged meddling in the 2016 US election, if Turkey purchased S-400s.

The US has already halted its delivery of F-35 fighter jet parts to Ankara due to the latter’s plans for Russian military equipment.

The Pentagon has long been concerned by the possibility of Turkey purchasing Russian air defences along with F-35s, allegedly providing Russian experts with key insights into the radar’s cross sections, flight profile, and other sensitive data related to the jet’s technology.