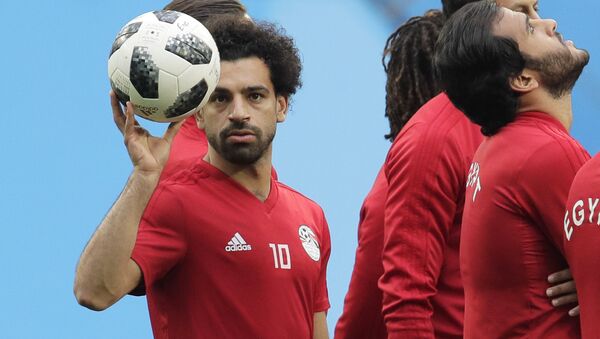 Chelsea Football Club has found itself at the epicentre of a scandal after a group of fans were filmed chanting a racially abusive song about Mohamed “Mo” Salah, Liverpool’s forward of Egyptian descent.

Three Chelsea fans have been banned from a Europa League match after being filmed singing “Salah is a bomber” while referring to the Liverpool superstar, Egyptian footballer Mo Salah.

Upon becoming aware of the footage, the football club issued a statement, in which it highlighted that it had taken action against the individuals featured in the video:

“Chelsea FC finds all forms of discriminatory behaviour abhorrent and where there is clear evidence of Chelsea season-ticket holders or members involved in such behaviour, we will take the strongest possible action against them. Such individuals are an embarrassment to the vast majority of Chelsea supporters who won’t tolerate them in their club”, the club said in a statement.

Working together with security staff, Chelsea managed to identify some of the hooligans before the game, with three of the six being barred entry into Sinobo Stadium.

The 19-second clip, apparently filmed by the protagonists themselves, showed a group of Blues fans in a bar in the Czech capital of Prague chanting the derogatory song about the Muslim player to the tune of “September” by Earth, Wind and Fire.

It’s not on the terraces, but it’s still a disgrace. We don’t want fans like that anywhere near our game.

We will be liaising with @ChelseaFC to ensure those involved are identified and punished swiftly and effectively. #KickItOut pic.twitter.com/IOhB3NfyHg

Liverpool also issued a statement to defend one of its best players and condemn the behaviour as “unadulterated bigotry”, stressing that there’s no place for such conduct either in football or in society as a whole.

“The video circulating online, showing vile discriminatory chant being aimed at one of our players, is dangerous and disturbing. […] Liverpool Football Club believes it is the responsibility of those in positions of authority, following proper process, to act urgently to identify and then punish anyone committing a hate crime”, the club said.

Liverpool FC continued by saying that the club was working with police to “ascertain the facts” around the now-viral video with an eye to identifying the individuals in it.

“In addition, we are working directly with Chelsea Football Club on the matter. We thank them for their condemnation and a commitment to act urgently to identify any individuals responsible”.

The footage has set off a major storm on social media, with people saying that the hooligans should receive a lifetime ban from football matches:

Good ban them for life. Racism isn't acceptable, not just in football, but in normal society.

Ban them. It's disgusting.

Good response. Please ban them for life. keep moving the bad eggs out.

First off ban them for life. Then find out where they work and get them sacked. Can’t paint every Chelsea fan the same as this. If it was the other way around we would no better.

Salah had so much respect for Chelsea he didn't even celebrate when he scored. And this is how some fans pay it back? If I was Salah and scored I would run to that Chelsea end and go on the knees and thank Allah, just for fun.

Many have thrashed the individuals involved as “racists”, but noted that Chelsea’s fan base should not be defined by those in the video:

I’m never ashamed of my club because of our performances on the pitch but the stuff such as this off it. Disgraceful pricks, jealous of Salah and his success. He doesn’t deserve this or nor does anyone. The world would be a better place without these lot. #getsomeeducation

Idiots… how many more times will the minority of disrespectful Chelsea fans makes rest of us fans pay for their stupidity!!! I am getting sick of this

Disgusting, they do not represent @ChelseaFC or the most part of the fan base. All the wonderful work Chelsea and Mr Abramovic is trying to do re foundations, kicking out racism and they put another bad cloud on Chelsea.

Disgraceful behaviour. Hate crime and should be dealt with appropriately.

This is not the first time that Mo Salah has been verbally abused by football fans: just two months ago, the Metropolitan police and West Ham United FC launched an investigation into a video in which a supporter can be heard shouting “Salah, you f**king Muslim, f**king Muslim c*nt” at the Liverpool striker.