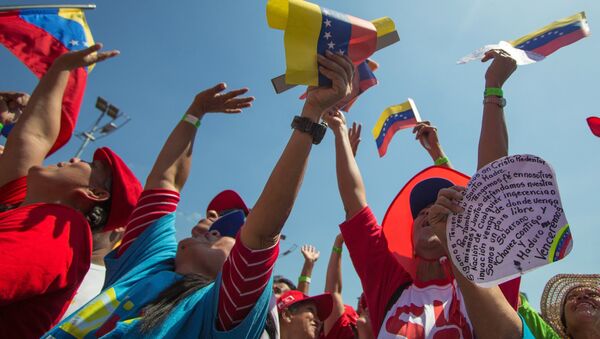 During a UN Security Council meeting on Wednesday, US Vice President Mike Pence urged the international community to reject Venezuelan President Nicolas Maduro’s government by pointing to the example of Nazi Germany.

Venezuelan President Nicolas Maduro has struck back at US Vice President Mike Pence, who compared his government with that of Nazi Germany during a UN Security Council session.

"Today he [Pence] went to the UN to say that I was Adolf Hitler and that the world should unite as it united against Adolf Hitler. I think that Adolf Hitler is on the other side. Supremacists, racists, fascists do not rule in Venezuela, they rather rule in the north. Here [in Venezuela], it’s the people who rule", Maduro said in a televised message.

Maduro directly addressed Pence, having stressed that unlike the United States’ presidents, he has never given orders to invade any country, and he will never do it.

“We are not a people with military bases all over the world, like you, Mr Pence, you have 800 military bases in the world. You have occupied, invaded, and bombarded nations across the world for decades, you support coups", Venezuela’s sitting president noted.

Venezuela’s Foreign Minister Jorge Arreaza, for his part, took to Twitter to slam Pence’s remarks and stress that the United Nations should not be used as a platform for attacks on the South American country.

TWEET: "[The United States] uses attributes around the humanitarian situation in Venezuela. Then, Mike Pence and Europeans perform a technical show and voice political, economic and even military threats. The United Nations should not be allowed to be used this way".

Their response was to a speech by Pence at the UN Security Council meeting on Wednesday, where he told diplomats that Maduro’s time was up, and the international community should recognise opposition leader Juan Guaido as Venezuela’s president, as well as to revoke the UN credentials of Maduro’s government.

“When a brutal dictatorship arose in Europe, the world failed to respond. Millions of lives were lost in the Second World War. So the United States is calling on the United Nations to live up to its very purpose. Reject the failed leadership of Nicolas Maduro”, Pence said on Wednesday.

The United Nations should revoke the credentials of Venezuela’s ambassador to the @UN, recognize Interim President @jguaido, and seat a representative of the free Venezuelan government in this body without delay! pic.twitter.com/1CRhBBr5J6

The vice president then reiterated the Trump administration’s motto about the ongoing Venezuelan crisis: “All options are on the table” when it comes to forcing Maduro out of office.

Since early January, Venezuela has been rocked by a political crisis that erupted after Juan Guaido was elected the head of the opposition-led National Assembly, which all other government branches have been refusing to recognise since 2016.

World
Nebenzia Urges US to Recognise Venezuela’s Right to Be ‘Master of Its Fate’
In mid-January, just two days after the country’s Supreme Court annulled his election, Guaido proclaimed himself Venezuela’s interim president in defiance of Maduro, who was re-elected in May 2018 and sworn in for a second presidential term on 10 January.

The move was instantly approved by the United States, prompting a host of countries across the globe to follow in its footsteps, while a number of nations, including Russia, China, Cuba, among others, reaffirmed their support for Maduro as the legitimately elected president.

While Maduro himself has accused Washington of staging a coup d’etat and blasted Guaido as a US “puppet”, the Trump administration has ramped up its efforts to remove him from power, consistently stressing that “all options” were on the table.