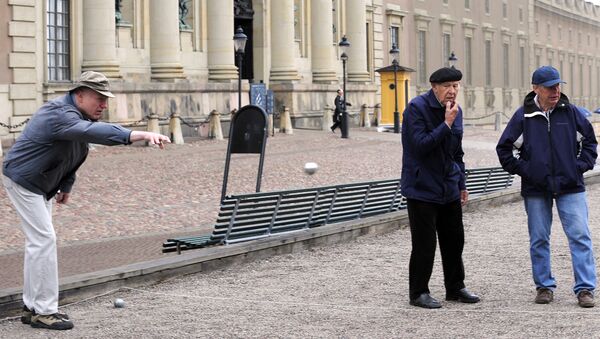 While the Swedish pension system faces major challenges as the population lives longer and fewer children are born, former Swedish Prime Minister Fredrik Reinfeldt claimed that his compatriots will have to work longer and embrace more immigration to keep their pensions.

To have a decent pension, some Swedes may need to work until they reach the ripe age of 75, provided that immigration remains at least level, former Swedish Prime Minister Fredrik Reinfeldt of the liberal-conservative Moderate Party has claimed.

"I have tried to look ahead and I see a greatly increased life expectancy at the same time as we have expectations of pensions that are not right. They appear much lower than what people think. My conclusion is that we must encourage more people to work longer, we must encourage a new approach to senior citizens' abilities", Reinfeldt told Swedish Radio.

The former Moderate Party leader also argued that immigration is needed as a backbone for the shaky pension system.

"Not being open to migration, not encouraging people to come to our country comes at a very high price. This contributes to eroding the pension system, and it also coincides with a situation when we have low birth rates. It already creates tension, but especially when we look forward, it will be one of the really big problems. Demography is one of our absolute biggest challenges", Reinfeldt said.

Reinfeldt assured his compatriots that career development opportunities will be offered for older workers, stressing that people can offer their employees new opportunities in their forties, fifties, sixties and beyond.

"We should also note that those who are 70 today show the same mental and physical attitude and ability that the 50-year-olds did in the early 1970s", Reinfeldt said.

Reinfeldt called for a longer working life before, and his new report is called "Working to 75 — a Good Start". Those born in the 1990s are likely to settle for 40 per cent of their final salary, he noted. However, Swedes were not too happy about Reinfeldt's ideas for the future.

Expressen's columnist Patrik Lundberg pointed out that life expectancy for working-class women is decreasing, with many not making it to 75. Therefore, if Reinfeldt had his way, they would "work themselves in into the grave", Lundberg noted.

"With a limited liability company that through speeches and consulting made SEK 14.5 million [$1.57] last year alone, it is easy to understand why he himself looks so spry while he proposed this", Lundberg concluded.

"Wasn't it precisely this situation we were to avoid by taking in hundreds of thousands of immigrants? They were supposed to support Sweden's aging population. Does Reinfeldt mean that it didn't work? Was he wrong then?" journalist Mattias Albinsson tweeted, taking a jab at Reinfeldt's own mass immigration policy of the early 2010s.

​"Lower pensions, longer working life, higher immigration… Former Moderate Prime Minister Reinfeldt keeps insisting, despite the results we've had so far. It is important that you never again allow such high-ranking politicians to be as detached from reality as Reinfeldt still allows himself to be", Edward Nordén of the Citizen's Coalition Party tweeted.

Economist Torbjörn Hållö pointed out that Reinfeldt omitted the fact that today's proportion of old and the young cannot be maintained due to the simple fact that immigrants themselves get older. Therefore, if Sweden was to maintain today's supply ratio (which is able-bodied 15-64-year-olds vs the rest) then net immigration of 19-38 million is needed until 2080, he pointed out. This would give Sweden a maximum population of 54 million.

For decades the Moderate Party (previously known as the Right and sometimes referred to as the Conservatives) used to be the largest counterweight to the centre-left Social Democrats, which governed Sweden for most of the 20th century. During Reinfeldt's tenure, however, which was marked by the "Open your hearts" rhetoric, the party moved to the centre and embraced multiculturalism.