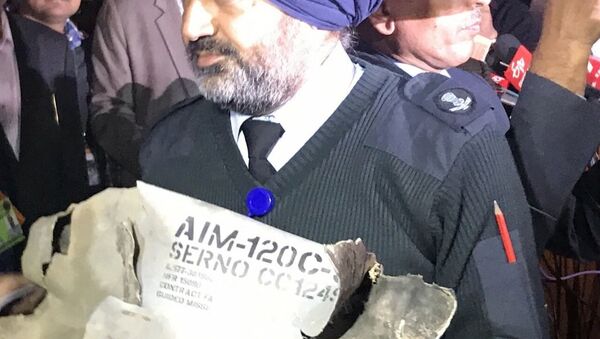 India has asked Washington to clarify whether US military personnel were present at bases from where Pakistan Air Force (PAF) F-16 fighter jets were deployed to the 27 February air battle between the two countries’ warplanes, the Economic Times reports.

The Indian newspaper cited unnamed sources as saying that the Pakistani military had allegedly asked all American personnel to leave the Pakistani bases as they were preparing for forward deployment. US officials are yet to comment on the issue.

The sources, in turn, referred to end-user conditions agreed between the US and Pakistan which stipulate that “a detachment of American military personnel has to be present at each of the bases where the F-16s are stationed to oversee their actual usage and deployments”.

While New Delhi believes that Washington will not permit Islamabad to direct the F-16s towards Indian airspace, Pakistan has repeatedly cited “its right to use these warplanes in self-defence, which is one of the conditions mentioned in its agreement with the US”, according to the sources.

This followed the IAF presenting what it claimed to be a radar images of the dogfight between the F-16 and Indian MiG-21. According to New Delhi, this image is "irrefutable proof" that an F-16 was downed during the air battle — something Islamabad has repeatedly denied.

The remarks came as Pakistan Army spokesperson Major General Asif Ghafoor tweeted that “repetitions don't make truth of a lie” and that “despite claiming possession of evidence it shot down the F-16, the IAF [the Indian Air Force] are still short of presenting it”.

Earlier, the Foreign Policy magazine reported that US defence officials had taken stock of the F-16s at different airbases in Pakistan and found none to be missing.

While Pakistan claims that it downed two IAF MiG-21 planes during the dogfight, India insists that the IAF only lost one plane and that its forces managed to down a PAF F-16 — an aircraft that was provided to Islamabad by the US.

The American jets were supposed to be used in the fight against terrorism which is why Delhi urges Washington, which still maintains a wait-and-see attitude, to respond to the “wrong” use of the combat aircraft, the Indian government said.

Asia
Pakistan Forces Remain on Alert Amid Escalation With India, Border Trade on Hold
The development comes against the backdrop of ongoing tensions between India and Pakistan over alleged terrorist camps in Pakistani territory which New Delhi insists house the militants responsible for the 14 February car-bomb attack in Pulwama, which killed about 40 Indian police officers in Kashmir. Islamabad denies the existence of any terrorist camps on Pakistani soil.

Accusing Pakistan of doing little to stop the terrorists from operating on its territory, India launched airstrikes on Pakistani-controlled Kashmir on 26 February, in what was followed by a dogfight between the two countries’ warplanes over Kashmir.