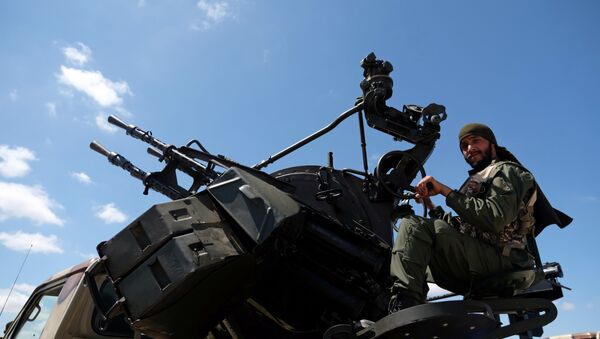 The forces of Field Marshal Khalifa Haftar have been closing in on the Libyan capital, which is controlled by the UN-backed government.

A source from Haftar's entourage told Sputnik last Friday that his forces had assumed control over Tripoli International Airport. However, the Libya Ahrar TV channel reported on Monday that the Tripoli-based government had recaptured areas seized by forces loyal to Haftar, including at the airport.

On 4 April, the LNA commander ordered an offensive on Tripoli, controlled by the UN-supported interim Government of National Accord (GNA), to "liberate it from terrorists". His army earlier seized control over the cities of Surman and Garyan, located west and south of Tripoli, respectively.

The Tripoli government has mobilised additional forces and raised the emergency level to its maximum amid plans of the Libyan National Army to move further into GNA-controlled territories.

A years-long civil conflict that broke out following the overthrowal and murder of the former head of state, Muammar Gaddafi, resulted in a split government, with the country's eastern and western parts being controlled by separate powers. The LNA-backed parliament, which was elected in 2014 and is based in the city of Tobruk, controls the east of Libya, while the internationally recognised government, established in 2015, governs Libya's western parts from Tripoli.

The United Nations announced that it would hold a conference in the central city of Ghadames on 14-16 April to discuss solutions to the conflict and set a date for organising country-wide elections.

Haftar and the GNA had already agreed in February to unite Libya's state institutions and hold general elections. In late March, the commander vowed to resolve the ongoing crisis "through the formation of the government of national unity" within the following two weeks.