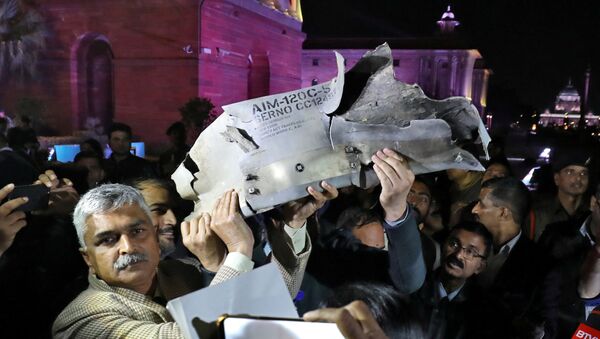 India’s armed forces previously showed parts of an AMRAAM medium-range missile allegedly launched from a Pakistani Air Force F-16 that was recovered in the Indian-administered part of Kashmir following a dogfight on 27 February. Islamabad has consistently denied having either scrambled or lost US-built fighter jets in the aerial combat.

Simhakutty Varthaman, retired Indian air marshal and father of Wing Commander Abhinandan who was briefly held in custody in Pakistan, claimed that Pakistan’s F-16 purportedly deployed in a 27 February dogfight and its AMRAAM missiles were a “real threat” to New Delhi, The Times of India reported.

“The Indian Air Force strike happened when the maximum targets were inside the camp. The structural damage might be limited, but the fuse of the bomb is delayed to ensure maximum casualties. Pakistan’s F-16s and AMRAAM missiles were the real threat to us. We had to first get F-16s off our back by making sure they were headed to some other direction when we were going to Balakot”.

Speaking at the Indian Institute of Technology Madras on Wednesday, he said that the laser-guided smart bombs used to attack a suspected Jaish-e Mohammad camp at Balakot could have killed 250 to 300 terrorists.

Varthaman then added that India had launched seven aircraft towards Bahawalpur, which he claimed was the “headquarters” of Jaish-e Mohammad.

“Pakistan thought we were on the way to attack Bahawalpur and sent F-16s to engage with our fighter aircraft. Simultaneously, we launched aircraft to attack Balakot. In a nutshell, the Pakistan Air Force was deceived completely. Pakistan was in a total state of alert, they knew an attack from India was imminent. However, they did not realise that we got into their territory”, he said.

The Times of India cited Varthaman as saying that the Balakot strike was the first time that IAF aircraft had crossed the Line of Control (de facto border) since the 1971 war with Pakistan.

“When fighter aircraft fly 10 km within the border, radars alert us to turn back. If a pilot goes within 8 km of the border, he faces a lot of questions and inquiry. As a nation, we decided to violate this huge thumb rule and went inside Pakistan. But, the government clearly mentioned that it was a non-military, pre-emptive strike”, he said.

Varthaman went on to say that the choice of the target had been stipulated by the desire to “avoid civilian casualties”:

“The facility was located in a thick forest on a hilltop far away from civilian presence”.

Pakistan Deploys Entire F-16 Squadron on Indian Border - Report
In response to the attack, the Indian Air Force carried out airstrikes on a suspected terror camp in Balakot, Pakistan on 26 February, later claiming it had killed 300 terrorists.

Islamabad has denied the existence of any such camps in the area, with local media citing locals as saying that besides hitting some 15 pine trees, only one elderly villager was hurt in the attack.

The following day, the two countries' aircraft engaged in aerial combat over Kashmir, with Islamabad alleging it had shot down two Indian aircraft and captured Abhinandan. New Delhi, in turn, admitted to the loss of only one of its MiG-21s and claimed that it had destroyed a Pakistani F-16, having displayed parts of an AMRAAM medium-range missile that was recovered in Indian-administered Kashmir.

The missile is said to have been fired by a US-made jet, with India alleging that Islamabad could have violated the fighter jet's sale deal with the United States. In the meantime, Pakistan has flatly denied that US-made F-16s were either deployed or lost.

Indian pilot Abhinandan Varthaman and his MiG-21 plane were downed during aerial combat over the disputed region of Kashmir on 27 February. The Indian side claims that Varthaman managed to destroy a Pakistani F-16 fighter jet before being brought down himself and forced to eject from the aircraft.

World
US Takes Claims of Pak's 'Misuse' of F-16 in Dogfight With Indian MIG Seriously
Shortly after landing in the Pakistani-administered part of Kashmir, he was captured, with a video circulating on social media allegedly showing Pakistani troops protecting him for a furious mob that purportedly demanded that the pilot be handed over to them.

After spending two days in Pakistani custody, Islamabad released the pilot as a gesture of goodwill. Moments before his release, a video emerged showing Abhinandan heaping praise on the Pakistani army for saving him from the mob and expressing “regret over the role of Indian media for creating war hysteria”.

Some local media later suggested that the video had been recorded under duress and was allegedly heavily edited.