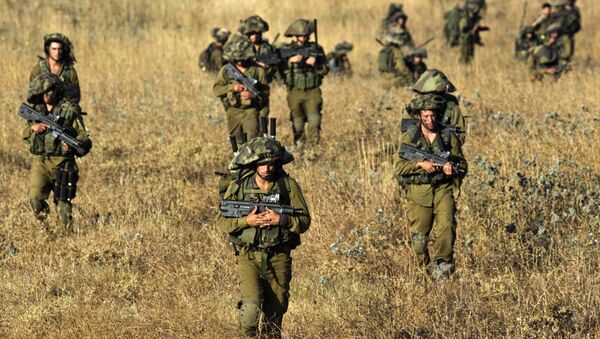 Trump's Golan Heights declaration has prompted growing concerns among the regional players. Speaking to Sputnik, Turkish scholars and Iraqi Kurdistan politicians explained that the US Golan decision may affect Turkey, Iran and Iraq and translate into nothing short of a large-scale conflict in the region.

Donald Trump's unilateral decision to recognise Israel's sovereignty over the Golan Heights, seized by Tel Aviv from Syria back in 1967 and formally annexed by Israel in 1981, is continuing to stir fears of a further escalation of tensions in the Middle East.

"Having taken advantage of the US decision, Israel will be able to expand its sphere of influence in the territories it occupied," Gokhan Bozbas, a coordinator at the Centre for Middle Eastern Strategic Studies (ORSAM), told Sputnik Turkey, adding that Trump's Golan declaration had "violated the UN resolution adopted by the international community and unilaterally supported the occupation".

UN Chief Slams US' Golan Move, Says Syrian Peace Requires Territorial Integrity
According to Bozbas, the US move obviously played into the hands of Israeli Prime Minister Benjamin Netanyahu, who sought to come out on top in the upcoming 9 April Knesset elections.

For his part, Yasin Atlioglu, a researcher at the 21st Century Turkey Institute, warned against an all-out regional conflict prompted by Trump's Middle Eastern policies.

Having recalled that Washington's Golan move was preceded by the recognition of Jerusalem, the researcher stressed that Trump's pro-Israel policy was by no means limited to the Golan and Jerusalem.

"Given the toughened anti-Iranian sanctions, the situation in Syria, as well as sanctions imposed against the Lebanese Hezbollah, Trump's decision on the Golan can be seen as a harbinger of a large-scale clash in the region," Atlioglu said. "Chaos and instability have engulfed the Middle East, and Trump's decision will further aggravate this situation."

Bombing of Aleppo: Analyst on How Israel Raises Stakes After Trump's Golan Move
At the same time, he cast doubt on the probability of a war against Israel by suggesting that "the countries of the region have not got enough strength for that".

According to the researcher, the international community should have voiced its condemnation of Trump's move much more resolutely. He noted that the precedent was fraught with severe risks as other states may now follow the US suit and try to legitimise their attempts to occupy foreign territories.

"Trump's decision signals injustice and disrespect towards the Muslim world. It will have impact on other countries in the region, namely, Turkey, Iran and Iraq," he concluded.

Speaking at an election rally in Istanbul on 26 March, Turkish President Recep Tayyip Erdogan denounced Washington's decision concerning the Golan. He stressed that the US had neither jurisdiction nor right to give the Golan to Israel and vowed to bring the Golan issue to the United Nations.

"Many countries, including Turkey, have expressed their dissatisfaction with this decision of the United States," Aydin Maruf, a representative of the Iraqi Turkmen Front and member of the Iraqi Kurdistan Parliament (IKP), said. "We fully share Turkey's position on this issue. The Golan Heights belong to Syria, and Syrian Turkmen traditionally reside there. America's decision on the Golan Heights contradicts the norms of international law."

Trump’s Golan Heights Stunt Ends Need for Israel-Syria-Palestine Talks - Scholar
According to Maruf, Trump's move has signalled Washington's support for Israel's illegal occupation. Having said that the pro-Israel move will further destabilise the region, the parliamentarian underscored that "all decisions related to the territories must be made by people living in these territories".

Muhsin Doski, a member of the Democratic Party of Kurdistan (KDP), opined that Washington was pursuing its own political interests by recognising Israel's sovereignty over the Golan.

He lambasted the Trump administration for its double standard approach referring to its unwillingness to supporting the Kurdish independence referendum which was held on 25 September 2017.

Doski presumed that Trump's move may further escalate tensions in the region, which does not correspond to the interests of the Kurdistan Regional Government (KRG).

For its part, the Patriotic Union of Kurdistan (PUK), the second largest party in the IKP, refrained from voicing its position on the issue.

"[Trump's] decision concerns Israel, Palestine and Syria. It does not affect the KRG much. This is a political decision that will not benefit the [Iraqi] Kurdistan region, since it has no interests associated with the Golan Heights", PUK spokesman Sadi Ehmed Pire told Sputnik.

Following Washington's transferal of the US Embassy to Jerusalem in May 2018, Trump announced that the US would recognise Israel's sovereignty over the Golan on 21 March 2019. Four days, later the US president signed a presidential proclamation on the Golan Heights' recognition. Russia, Turkey, as well as a number of Arab and European states, condemned Trump's move, while the UN reiterated that Washington's Golan decision had no legitimacy in the eyes of the international community.