‘Nobody Likes You’: No One’s Laughing at Comey’s April Fool’s 2020 Tweet 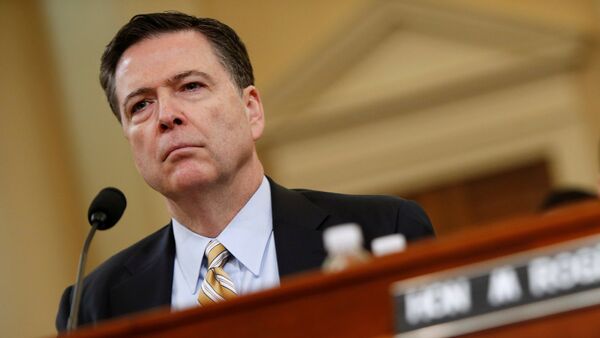 In a cryptic Monday tweet, former FBI director James Comey might have said he was running for office in 2020. Hours later, he claimed the post was a joke, but either way, Twitterers definitely didn’t hold back their opinions about the prospective politico.

Comey's tweet Monday featured a picture of him standing on the centerline of a country road, staring off into the distance, with the caption "I'm in. We need someone in the middle. #2020."

​Before Comey was fired in May 2017 by US President Donald Trump, he was among the least popular men in Washington. He was a holdover from the Barack Obama administration in a freshly conservative government, but even Democrats still held him partly responsible for Hillary Clinton's loss, as Comey had made the decision to reopen the FBI's investigation into her email server just weeks before the November 2016 election, to which Democrats attributed a fall in political support for her.

That fall, after Trump's sacking of him made him something of a Democratic hero, Comey made an eerily similar tweet with him standing, once again, in the middle of a country road. "Goodbye Iowa. On the road home. Gotta get back to writing. Will try to tweet in useful ways," the October 23, 2017, tweet read, which was made from an account named "Reinhold Niebuhr," widely believed at the time to be his personal Twitter account. It's now his blue-checkmarked account.

At the time, his running shoes and his visit to the key caucus state of Iowa fueled speculation that he did indeed intend to run for office in 2020. Could this have been Chekhov's Gun?

Goodbye Iowa. On the road home. Gotta get back to writing. Will try to tweet in useful ways. pic.twitter.com/DCbu3Yvqt3

​However, this was far from the only cryptic tweet made by the former FBI director. On March 24, following news that special counsel Robert Mueller's report on Russiagate had made the entire two year debacle a dead letter, Comey tweeted a picture of himself in a forest, gazing up at the trees, with the caption, "so many questions." Mueller was appointed to investigate the would-be scandal just days after Comey's firing.

​We still haven't figured out what that meant.

However, Twitter decided what Monday's tweet meant — a political campaign run — and made it absolutely clear what a horrible idea they thought it was.

In for what? Are you running for crossing guard? I mean nobody likes you https://t.co/hetxSsaesZ

​It's not a good sign if people are rooting for the cars when the former FBI director is in the street!

I usually side with pedestrians, but… https://t.co/GgYkmgCLBo

​Others noted how the photo seemed metaphorical.

​Some, however, just couldn't let bygones be bygones, and still remember how Comey's actions potentially influenced US politics in a colossal way.

It’s all so funny isn’t it, this mess that’s almost entirely your fault.