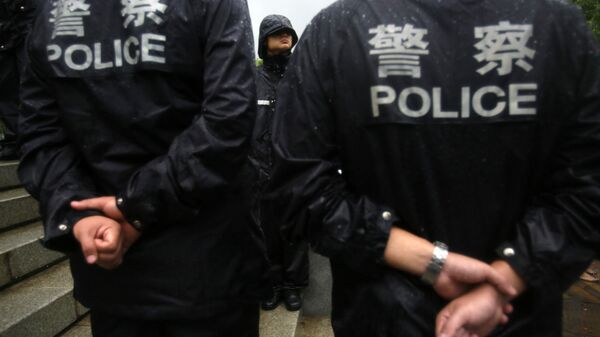 Kunxun was cloned from a seven-year-old female Kunming wolfdog called Huahuangma that serves at Pu'er police station in Yunnan. It has participated in cracking dozens of murder cases and is considered a great detective dog.

As training such a dog takes four to five years and costs about half a million yuan, the idea of cloning was suggested.

On Sept 12, technicians of the program obtained a sample from Huahuangma's skin from Pu'er and took it back to Beijing. They created a cloned embryo and implanted it into a beagle.

Kunxun was born via cesarean section, weighing 540 grams and measuring 23 centimetres long. According to a test by Nanchang Police Dog Base, Kunxun's DNA is 99.9 percent identical to that of Huahuangma.

After arriving in Kunming, Kunxun has adapted well to the climate and the base and showed great attachment to people.

"Kunxun has shown good aptitude on sniffing, detecting and adapting unfamiliar environment in our ability tests," said Wan Jiusheng, a senior researcher at Kunming Police Dog base. "It seems like that its genetic potential is better than other Kunming wolfdogs."

Police dogs start training 75 days after they are born. "If everything goes well, Kunxun can start working after 10 months' training," said Wan. "We plan to send Kunxun back to Huahuangma's trainer Li Hua, who has 33 years of experience with police dogs. We'd like him to record performance data to do comparisons on the two dogs."