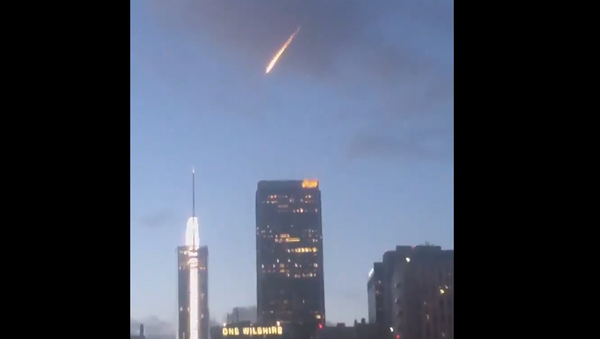 Moments after what appeared to be a fireball shot through the sky, the Los Angeles Police Department issued a statement to let the public know it was merely a movie shoot – but not all netizens were buying it.

A public announcement turned into a roasting session for the LAPD Wednesday night after the force's official Twitter account's public service announcement attempted to quell some suspicions about a possible "fireball" or "alien invasion."

PSA: A meteor did not crash into Downtown Los Angeles, and no, it's not an alien invasion…just a film shoot. This is Tinseltown after all.

Prior to the PSA, the spectacle was captured by several netizens who spotted the fireball from different angles.

What is this flying item on fire above downtown Los Angeles? pic.twitter.com/3tUu0jKL8L

WAS THAT A METEOR, DTLA?! Caught this from my balcony— it burned out right behind the Intercontinental! pic.twitter.com/BtbvbwzcVV

Despite the authorities' assertion that the mysterious streaking orb was just a scene from a movie, netizens unleashed a series of jokes — while also bringing up some good points about the announcement's vagueness (it did not bother to specify the film's name or studio, for example).

Uhh… I'm pretty sure meteors are added in post-production…

Is that really the lie we’re going with? pic.twitter.com/hmJVhKwCaV

Can you guys release the 911 calls from people who thought aliens were attacking?

👀 looks like someone was getting the best view of the #supermoon

While dropping their hint under the LAPD's tweet, the Red Bull Air Force announced Thursday morning that it was their own skydivers, base jumpers and freeflyers who created the spectacle in honor of the third and final supermoon of 2019.

"In order to mark the occasion, some of the most experienced skydivers, BASE jumpers and freeflyers on the planet in the Red Bull Air Force took to the skies above the famous American city for the aerial flight," the company release reads.