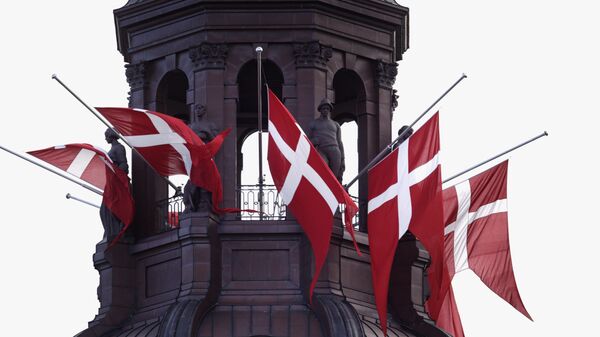 Danish MP Mette Abildgaard, the group leader of the Conservative Party, was asked to leave the parliament's chamber after bringing her baby daughter Esther Marie with her. Her Facebook post describing the situation has since gone viral, gathering hundreds of comments.

The first time MP Mette Abildgaard took her five-month daughter to her office, since the child's father couldn't help out and take care of her, was not crowned with success.

By Abildgaard's own admission, parliament speaker and former Danish People's Party leader Pia Kjærsgaard made it clear her she was "not welcome" with her baby, asking her to remove it.

Abildgaard said she had witnessed fellow MPs take their children to work without any problems, so she thought no permission was needed. She stressed that she had decided to taker her daughter along since she was "in a good mood" and didn't make "the slightest noise".

Kjærsgaard claimed she was only following the rules as speaker of Parliament and felt the baby was "disturbing the meeting".

"MPs should be in the chamber, not babies or children", Kjærsgaard later told the newspaper BT, nevertheless suggesting clearer guidelines for MPs with children.

Denmark is known as one of the world's most generous providers of parental leave, which both parents can split between them as they please.

Abildgaard claimed she had voluntarily returned to her work to "serve democracy". Meanwhile, while the mother had "some vote buttons to push", the baby was left with Torben, "the sweet secretary".

​Her decision left her compatriots divided. While some expressed deep sympathy for the young mother and called Kjærsgaard a "square rule enforcer", others called Abildgaard's behaviour "irresponsible".

"Babies do not belong in the parliament chamber. If you do not want a maternity leave, pay for a nanny at home", a rather typical Facebook response said.

"The parliament is a kindergarten anyway. Nice, though, to have someone try and stick to the rules", another Dane reacted wryly.

"You try to frame Pia [Kjærsgaard] as a bad person, but shoot yourself in the foot with your selfishness. How can it be someone else's fault that you have chosen to have children?" yet another response was.

Sissel van Run-Kvist of the Social Liberal Party posted a picture of MEP mothers with their babies at work.

​Meanwhile, this is not the first time a baby in the corridors of power has made headlines.

New Zealand Prime Minister Jacinda Ardern took her baby to her debut speech at the UN, earning the title of the first world leader to attend a general assembly meeting with her child.

Canadian minister Karina Gould went viral with a video of herself breastfeeding her son in parliament.