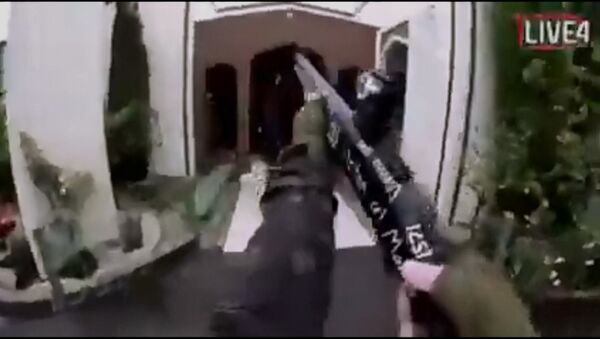 How the Shooting Rampage Began

The alleged gunman claiming to be 28-year-old 'Brenton Tarrant' entered the Al Noor Mosque Mosque in the city of Christchurch at around 01:40 p.m. local time on Friday and opened fire on worshippers; around 300 people were inside the building. His identity has yet to be confirmed by the police.

A second mosque on Linwood Avenue was also attacked, the police said, adding that three men, including 'Tarrant', and one woman had been taken into custody.

#TerroristAttack #Mosques #NewZealand
He is a Terrorist who killd more than 30 innocents in mosque..
not #gunman pic.twitter.com/uTeLC8hM2f

At least 49 people were reportedly killed and 48 more wounded in the shooting, as police confirmed “multiple fatalities” in what they described as a “significant incident”.

Multiple weapons and a stash of ammunition were reportedly filmed by the man in the 17-minute video which showed him arming himself, walking into the mosque and shooting indiscriminately.

While police have urged Internet users not to spread the video online, in the footage, which may have been taken from a helmet camera worn by a gunman, he is seen standing in the doorway, blocking people inside from escaping.

The #Christchurch terrorist began posting photographs of his weapons on twitter since february. This was entirely preventable. #ChristchurchTERRORISTattack pic.twitter.com/hsZ8H5nYOF

After shooting all the ammunition, 'Tarrant' is seen walking out to his car to get some more bullets from the boot of his car. He goes back to the mosque looking for survivors and shoots people lying on the ground motionless.

The 17-minute video ends with the shooter driving away at full speed. The clip captured the entirety of the shooting and was filmed without interruptions.

Prior to the shooting, the suspect uploaded a 73-page 'manifesto' on Twitter and the online forum 8chan to explain in detail why he'd committed his atrocity, according to social media reports.

In the “Great Replacement” manifesto, he identified himself as a 28-year-old “ordinary white man born in Australia to a working class, low-income family”.

The #christchurch shooter, who identifies himself as Brenton Tarrant, has live-streamed his deadly attack on dozens of people in a sickening video… the worst thing I’ve ever seen. The shooter has also posted a manifesto about his background and beliefs. ⁦@7NewsMelbourne⁩ pic.twitter.com/DLTk63wxIS

He reportedly noted that he had purposefully used guns to stir discord in the United States over the Second Amendment’s provision guaranteeing the right to bear arms.

'Tarrant' said that he had initially planned to target a mosque in Dunedin, but changed to the Al Noor and Masjid Mosques because they had “far more invaders”.

“By the definition, then yes. It is a terrorist attack. But I believe it is a partisan action against an occupying force”, he said, adding that “he did not initially plan to carry out the attack in New Zealand but that soon he “found out that New Zealand was as target rich of an environment as anywhere else in the West”.

Meanwhile, Australian Prime Minister Scott Morrison has stated that the Christchurch mosque shooter was an Australian citizen, describing the suspect as an “extremist, right-wing, and violent terrorist”.

Earlier, New Zealand’s Prime Minister Jacinda Ardern described the Christchurch mass shooting as one of the country’s “darkest days”, stressing that “clearly, what has happened here is an extraordinary and unprecedented act of violence”.

“For now my thoughts and I'm sure the thoughts of all New Zealanders are with those who have been affected and also with the families," Ardern added.

Christchurch Mayor Lianne Dalziel, for her part, said that she was "shocked beyond words" by the shootings.