#FakeMelania is Back: Twitter Suspects FLOTUS of Using 'Body Double' 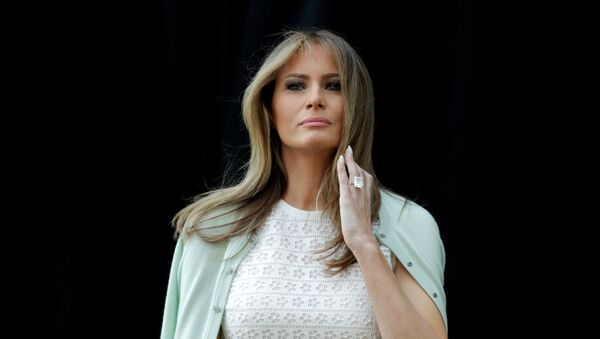 © REUTERS / Yuri Gripas
Subscribe
International
India
Africa
Two years ago, many people began theorising that First Lady of the United States Melania Trump was using a body double for some of her public duties, and the Twitter speculation has returned to the spotlight over the weekend.

Netizens suspect that Melania Trump has once again used a body double for an official appearance with her husband, US President Donald Trump, even though the White House and POTUS himself previously called the idea absurd.

Seriously… who the fuck is this??? It's clearly not Melania.#FakeMelania pic.twitter.com/y1Ua6pvaVb

yesssss fake Melania is back https://t.co/kwWbRL8D3u

Conspiracy theory enthusiasts have bombarded social media platforms with memes and tweets reviving the #FakeMelania theory as President Trump and his better half visited tornado-ravaged Alabama.

Oh come on, they're not even trying now #FakeMelania pic.twitter.com/Z7DBfd2WIj

Wow. I gave up on conspiracy theories a long time ago. But #FakeMelania dropped me down a deep hole just now.

me: these conspiracy theories are out of control, ppl look different in different lighting and pictures and makeup, so what

also me: *clicks #FakeMelania* holy shit that's not her at all

Netizens showed off their photoshop skills, having doctored the original image of the couple, by replacing “body double’s” face with the face of Aerosmith lead singer Steven Tyler…

I don’t know what this #FakeMelania is all about. pic.twitter.com/3Fe7yw2sYD

I don't get this Fake Melania stuff at all. pic.twitter.com/lbWD5RuQ7h

A fellow Twitterati made a smooth reference to HBO’s wildly popular series Game of Thrones:

Some pointed out that the woman on the photo was shorter than the original Melania:

It’s bizarre that they trot out #FakeMelania, thinking no one will notice. This one’s shorter + looks nothing like her!

Where’s the REAL one? pic.twitter.com/3DqtT02O65

Hmmmmm. This “Melania” is much shorter than the “other” Melania who has accompanied Trump to prior natural disasters. Maybe it is true about the Twitter rumor, #fakemelania Just saying…. pic.twitter.com/JChxwriXWH

Others sarcastically presented somewhat solid proof that the lady featured next to President Trump was fake – the couple was holding hands, but the real Melania has repeatedly been spotted snubbing Trump’s attempts to have a PDA moment:

Okay… are we all gonna ignore Trump holding hands today with a fake Melania?!

Once the image surfaced online, Twitterians seemed to be unstoppable as they recalled some TV shows that “pulled a #FakeMelania”:

Game of thrones pulled a #FakeMelania with Daario Naharis pic.twitter.com/9ZXZeGzzQd

#FakeMelania Remember when Friends pulled this shit in season one 😂😂😂 Yeah like no one was gonna notice 👌🏻😭🤣 pic.twitter.com/hWJmsDUm3o

fuck this #FakeMelania shit, what about that episode of Drake And Josh where they just replaced Helen and nobody said a word??? pic.twitter.com/d0xjNPkTQC

“Once again, we find ourselves consumed with a ridiculous non-story when we could be talking about the work the first lady is doing on behalf of children, including the opioid crisis that is gripping our nation”, FLOTUS’ Communications Director Stephanie Grisham told CNN in 2017.