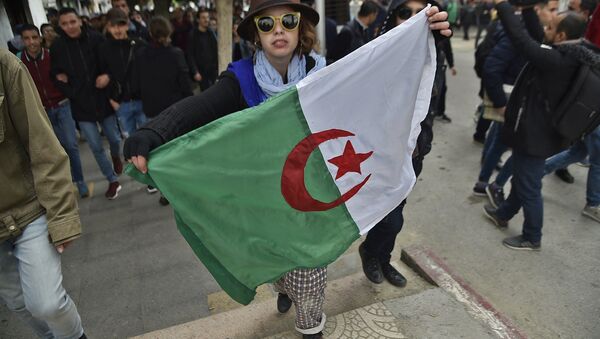 MOSCOW (Sputnik) - Protests in Algeria against incumbent President Abdelaziz Bouteflika seeking a fifth term in the upcoming election are likely to continue and may result in his resignation before the vote, but they will hardly lead to any fundamental changes in the country's political landscape, the experts told Sputnik.

The Algerian presidential election is scheduled for April 18. Bouteflika, who suffered a stroke in 2013 and has since been wheelchair-bound, officially announced his presidential bid on 10 February, triggering nationwide protests. Later, the 82-year-old leader pledged in a written statement, that if re-elected, he would call snap vote and would not run in it in order to ensure the transition of power to a new president. Despite that, the rallies against his re-election bid continue.

Earlier in the week, media reported that Bouteflika was currently in critical condition in a hospital in Geneva. The president’s campaign manager, Abdelghani Zaalane, has, however, dismissed the claims, saying Bouteflika was in Switzerland for a regular medical examination.

It's Not Ailing President but His 'Cronies' Who Decide?

According to Yahia Zoubir, a professor of international relations and the director of research in geopolitics at KEDGE Business School, ailing Bouteflika has long been in no condition to rule Algeria, where 75 percent of the population is below 35 years old, and it is actually the president's "cronies" who push for his re-election to stay in power.

"It seems to me that this fifth term is already on the way out, not just because of the demonstrations but also because of the horrible health condition of the president. In fact it is quite clear it is not the president that wanted to run for a fifth term, it is his cronies who put that on the table," Zoubir told Sputnik.

Africa
Travel Disruption Reported in Algeria Over Protest Against Bouteflika's 5th Term
Zoubir noted that most of the president's "cronies" are actually of the same age, so "it is his brother [Said Bouteflika, 61] and some other supporters who are running the country."

The expert claimed that some of the members of the presidential team were currently "jumping ship," expressing their solidarity with the protesters and opposing the fifth term." He opined that "at the helm of the state this is the dominant position right now."

Further reflecting on the future developments in the country, Zoubir voiced doubt that the election would actually take place. According to him, due to the absence of any viable candidate for the highest post, which he says is one of the results of Bouteflika's tenure, Algeria is likely to see emergence of some kind of transition institution that would postpone the vote and prepare the ground for the new political process.

"[…] There might be some sort of committee that would organize some sort of transition, postpone the election, go on a constituent assembly and try to salvage what is salvageable right now," Zoubir suggested.

John Entelis, a professor of political science at the NYC-based Fordham University, in his turn, predicted that the protests would continue, yet he also raised the issue of the absence of any viable contender who could garner wide public support.

Africa
Rallies Against Bouteflika's Bid to Seek Re-Election Resume in Algeria - Reports
Even if Bouteflika opts out of the election, there are many other factors that could hamper Algeria’s power transition, the professor noted. In particular, he suggested that, regardless of the incumbent's political future, "the basic contours of the political system and those who govern it will remain the same."

According to the expert, the wider ruling class, including the military, has no intention to give up political, military and economic interests, which it has been pursuing since the early 1960s.

"The Algerian opposition is enormously divided so while Bouteflika may step down, the military for its part will not withdraw from power. It has been pulling the strings since the 1965 coup that overthrew the first president of Algeria. So the military’s hands have been deeply involved in Algerian politics for decades. So they will ultimately determine in which direction the Algerian political system ultimately will go," Entelis said.

According to the experts, the hydrocarbons-dependent economy of Algeria, hit by the drop in oil prices, would be largely unaffected by the ongoing protests.

"Overall the economy has always been rather stagnant. It will continue to be stagnant. These protests I don’t think are going to fundamentally alter it … The economy has been dominated by the oil and gas sector for decades. The hydrocarbon industry is a capital intensive industry; it is not a labor intensive industry. You are not talking about hundreds and thousands of people working in the oil sector who if they are protesting they are not working. It doesn’t work like that. The economy continues," Entelis said.

The KEDGE Business School professor has shared the same view.

The experts went on to blame mismanagement and "rampant" corruption within Bouteflika’s inner circle as the main reasons behind the country's economic stagnation.