US Suspected of Deploying Avenger Drones to Syria for Mystery Missions 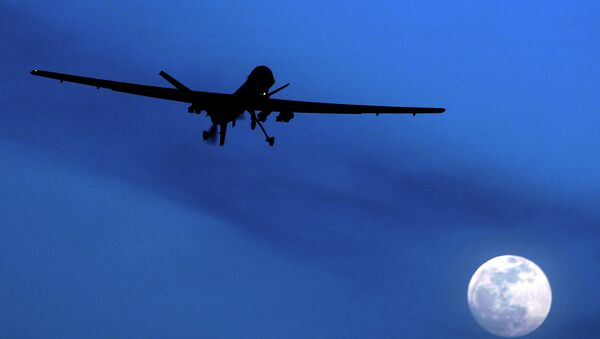 Earlier, Iran's Islamic Revolutionary Guard Corps claimed to have hacked into over half a dozen US drones flying over Syria and Iraq in recent years.

"A certain government agency" has been flying missions in Syria using the Q-11, a variant of the General Atomics Avenger drone also known as the Predator C, The Drive has reported, citing statements by the drone's manufacturer.

"We know for a fact that a handful of Avengers are flying under some classified umbrella for a certain government agency and that they have been active in the Middle East, and Syria, in particular," the outlet alleged.

The Drive speculates that the Air Force, or some other US government entity, such as the CIA, may have been operating drones in the Middle Eastern country under a variety of 'classified programs', with the stealth drones said to be "well suited to conducting discreet and flexible missions over less than welcoming airspace in Syria from bases in neighbouring countries."

Decommissioned F-117 Nighthawks Were Used in Syria, Iraq in 2017 – Report
Questioning earlier reports that the US had used soon-to-be decommissioned F-117 Nighthawk stealth jets over Syria, the outlet suggested that the use of the Avenger may have been one way of carrying out reconnaissance and strike missions over hostile territory, particularly in areas full of Syrian air defences.

Introduced in 2009, the General Atomics Avenger has an estimated cruising speed of nearly 650 km per hour, a 15,000 meter flight ceiling, and an endurance time of 18 hours. The drone can carry an electro-optical targeting system, is equipped with an onboard Lynx Synthetic Aperture Radar, and can carry a variety of guns and missiles on its internal weapons bay and external hardpoints.

The US and its allies began an air campaign over Syria in September 2014, ostensibly targeting Daesh (ISIS) and other terrorist elements in the country's east. The Syrian government has repeatedly condemned these operations, pointing out that they are illegal under international law and a violation of Syria's territorial integrity.

Iran Reportedly Hacked US Drones in Iraq, Syria, Got Intel From Them (VIDEO)
Last month, Iran's Islamic Revolutionary Guards Corps commander Brig. Gen. Amir Ali Hajizadeh alleged that Iran managed to hack into "seven to eight" US drones" flying over Syria and Iraq in recent years, accessing intel from their onboard cameras. The US military did not comment on the claims.
Newsfeed
0
Access to the chat has been blocked for violating the rules . You will be able to participate again through:∞. If you do not agree with the blocking, please use the feedback form
The discussion is closed. You can participate in the discussion within 24 hours after the publication of the article.
To participate in the discussion
log in or register
loader
Chats
Заголовок открываемого материала