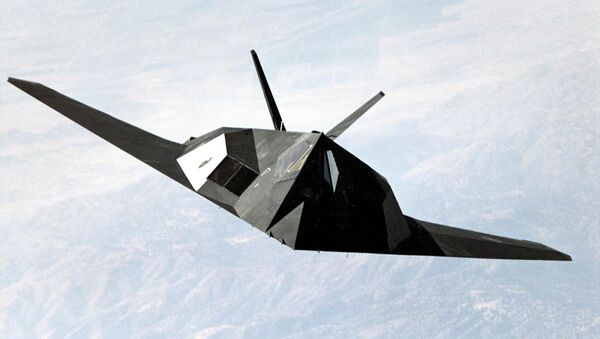 The once famous F-117 stealth attack jets were decommissioned several years after one was shot down over Yugoslavia in March 1999 by a Soviet-made S-125 missile defence system and after the F-22 took over some of the F-117's roles, when precision strikes were deemed essential for a mission.

Four of the now decommissioned attack jets F-117 Nighthawk were deployed for operations in the Middle East in 2017 due to an "operational need" that emerged, Dutch aviation magazine Scramble reported citing "very reliable information" obtained.

According to the magazine, the jets were conducting missions over Iraq and Syria using Small Diameter Bombs (SDBs). One of them was even reportedly forced to make a landing far away from its base due to an in-flight emergency. Scramble indicates that the jets were likely deployed in Saudi Arabia, the UAE, or Qatar. The US Department of Defence has not officially confirmed this report.

F-117 Nighthawks were decommissioned in August 2008, according to some estimates due to the introduction of the F-22, which is capable of firing guided missiles. However, the US Congress ordered the planes to be kept in a condition "that would allow recall of that aircraft to future service". The 2017 National Defence Authorisation Act ordered the "demilitarising" of four F-117s each year, meaning some of them are still capable of participating in operations.

READ MORE: Out of Retirement: US F-117 Jet That Bombed Yugoslavia Seen in the Sky

A total of 64 F-117 stealth jets were built since it was introduced in 1983 with only one being officially lost in combat. One F-117 was shot down by the Soviet-era S-125 missile defence system during the war in Yugoslavia. The pilot ejected from the plane and was later rescued by the US military.