WATCH: US Man Detained at Gunpoint for Picking Up Trash Outside His Home 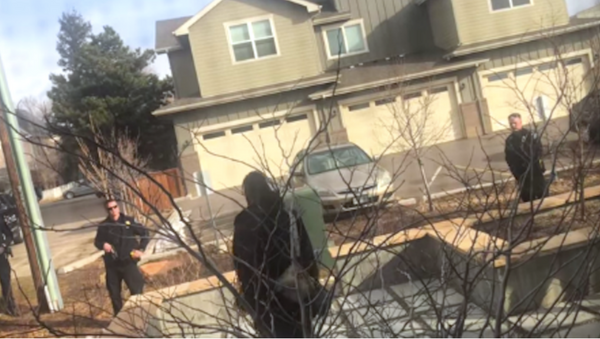 © YouTube/VanardoMerchant
Subscribe
On Monday, Colorado’s Boulder Police Department launched an internal investigation after footage surfaced of police drawing their weapons and detaining a man who was simply picking up trash outside his own home.

According to reports, an unidentified Boulder Police officer began questioning a man who was sitting in a partially enclosed patio area behind a "private property" sign around 8:30 a.m. Friday, asking if he was allowed to be there.

​The man, whose identity has also not been revealed, told the officer he lived and worked in the building, even showing the officer his school identification card. However, the officer detained him for further investigation, calling for backup because the man was allegedly being uncooperative and was unwilling to put down a blunt object. The man was using a clamp to collect trash from the front yard of his home.

Video footage of the encounter, caught on camera by the man's friend, was published on YouTube Saturday under the username "Vanardo Merchant."

"You're on my property with a gun in your hand, threatening to shoot me, because I'm picking up trash," the man being confronted by police can be heard saying. "I don't have a weapon! This is a bucket; this is a clamp."

"I'm not sitting down, and you can't make me," the man says as seven more officers arrive at the scene. "This is my property; this is my house — I live here."

"Just relax. Put that object down," says an officer, with a weapon drawn.

At the end of the video, the man is pictured putting the clamp down, and the officer is shown returning his gun to its holster.

On Tuesday, community members at a Boulder City Council meeting held trash grabbers in solidarity with the man in the video, while Boulder Police Chief Greg Testa briefed council members over the incident.

"This is an extremely concerning issue, and one that we are taking very seriously," Testa told the council Tuesday, adding that the first officer who arrived at the scene of the incident is on administrative leave while the internal investigation is ongoing.

In his statement, Testa said that the man confronted by police did not do anything unlawful. In addition, he confirmed that the initial responding officer drew his gun but kept it pointed at the ground. The other officers were carrying "less-lethal shotguns" and "shields," according to the Daily Camera.

In a statement, Charles Lief, president of Naropa University, at which the man is a student, told council members the incident is "by far the most difficult one for us to address with respect to our relationships in the city of Boulder," also noting that the man in the video has expressed that he is not interested in becoming a symbol of racism in the city.

"I do not want to underestimate the amount of trauma that was experienced by our student, who was the victim in this situation," Lief said, the Daily Camera reported.

"Students, staff and faculty of color at Naropa, and other institutions, have all experienced various degrees of racism living in this community," he continued.

The Boulder Police Department did not immediately respond to Sputnik's request for comment.