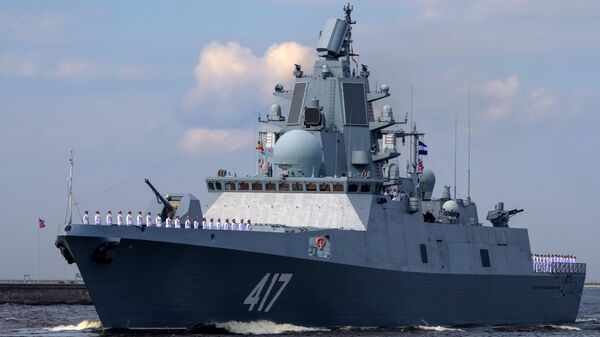 The development comes after the press service of Russia’s North Fleet reported on Tuesday that the Admiral Gorshkov frigate, equipped with guided Kalibr missiles, had entered the English Channel, in the Russian warship’s first such mission.

A UK Royal Navy warship was sent to intercept Russia's advanced Admiral Gorshkov frigate, which earlier conducted air defence drills off the coast of Scotland in the North Sea while en route to the Atlantic.

Commenting on the matter, British Minister for the Armed Forces Mark Lancaster said that “the  Royal Navy is always standing ready to defend the UK”.

During the Admiral Gorshkov exercises, flyovers of NATO and Swedish reconnaissance aircraft were reportedly detected near Scotland.

The drill came as the press service of the Russian North Fleet reported on Tuesday that the Admiral Gorshkov had started passing through the English Channel in the warship’s first such mission. The frigate entered service with the North Fleet in 2018.

“In the near future, a flotilla of ships headed by the frigate will carry out protracted missions in different areas of the World Ocean. The main goal is to showcase the Russian flag and ensure [Russia’s] naval presence in operationally important areas of the remote ocean zone," the press service pointed out.

The Admiral Gorshkov, equipped with Kalibr long-range cruise missiles, is expected to become part of the Russian task force in the Mediterranean in the next few months.

The task force, which consists of about 15 warships and support vessels, earlier launched Kalibr missiles at Daesh* targets in Syria.