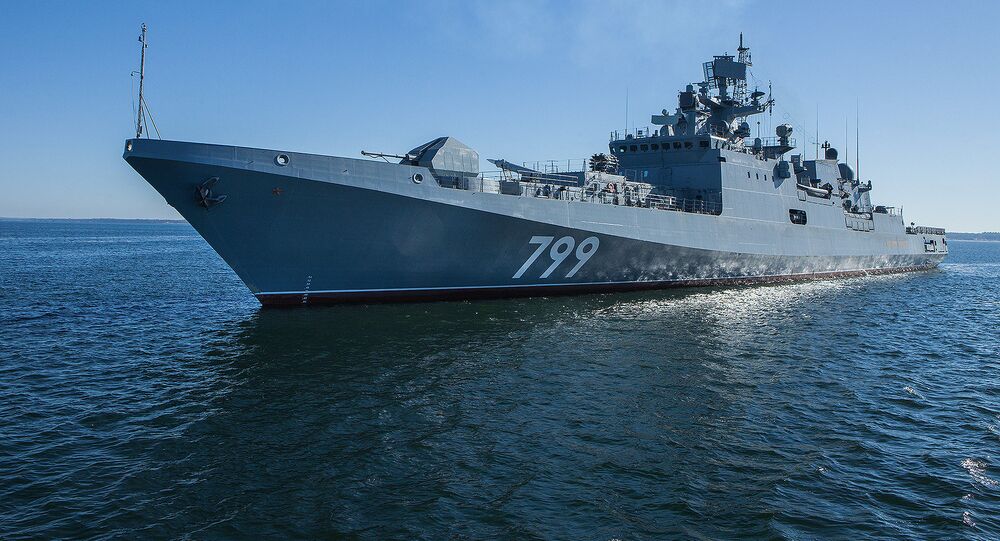 The warship will reinforce the Russian flotilla already deployed in the Mediterranean.

Russia deployed its new warship, Admiral Makarov, armed with Kalibr cruise missiles, in the Mediterranean Sea on Monday, according to a statement by the Russian Ministry of Defense.

"The Black Sea Navy Fleet's frigate Admiral Makarov left [the Navy base in] Sevastopol and laid a course for the Black Sea straits. The vessel will be acting in the standing naval force of the Russian fleet in the Mediterranean," the ministry said.

The statement did not disclose the ship's specific purpose and whether it will participate in counter-terrorism operations in Syria.

© REUTERS / Yoruk Isik
Russian Navy Gets Brand New Admiral Makarov Frigate
Earlier in May, Russian President Vladimir Putin said that Russian military vessels with Kalibr cruise missiles would be on permanent standby in the Mediterranean to counter what he called the terrorist threat in Syria.

Named after the 1970 ship scrapped in 1994, the Admiral Makarov is a relatively new vessel, launched in 2015. The frigate is armed with a wide array of weapons, but its main force consists of eight Kalibr cruise missiles. It is also equipped with 36 air defense missiles with a range of some 50 kilometers.

Russia has repeatedly used Kalibr missiles during its counter-terrorism operation in Syria, hitting targets belonging to Daesh, the Nusra Front and other terrorist organizations. The Kalibr was first used on October 7, 2015, when three warships launched 26 missiles from the Caspian Sea towards Syria. The missiles sailed over Iraqi and Iranian territory, successfully hitting targets more than 1,500 kilometers away.

Earlier this summer, Russia deployed several warships to the Mediterranean, including the Admiral Grigorovich, Admiral Essen and Pytlivy frigates, along with the landing ship Nikolai Filchenkov and the Vishny Volochek missile corvette.

According to the Intermediate-Range Nuclear Forces Treaty (INF), Russia and the US have agreed to ban all ground-based nuclear and conventional missiles with firing ranges between 500 and 5,500 kilometers. However, the treaty does not cover sea or air-launched missiles, such as the Kalibr.