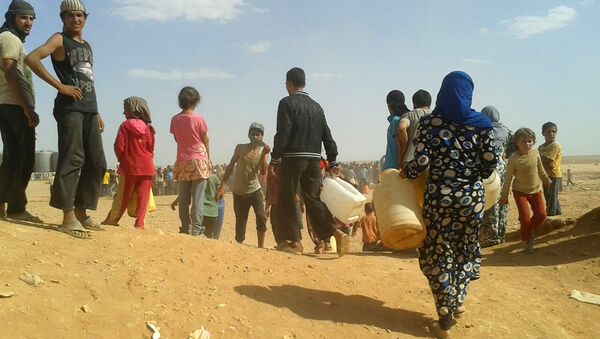 MOSCOW (Sputnik) - Sending a humanitarian convoy to the Rukban refugee camp located in the At Tanf area is out of the question as long as its territory is seized by the US-controlled militant groups, the joint statement of the Russian and Syrian interdepartmental coordination staffs said Wednesday.

"There is no question of sending a humanitarian convoy to Rukban camp under the conditions of the camp's residents are held by US-controlled militia," the statement said.

No convoy is able to help the humanitarian catastrophe that has unfolded in the camp and that can only be resolved by eliminating the facility, the statement added.

"Only full elimination of the camp can stop sufferings of the Syrians who are forcefully held there," the statement read.

Russia Calls for Immediate Evacuation of Syria's Rukban Refugee Camp - Envoy
The United States has handed over a list of provocative questions to Russia and refuses to let go Syrian refugees from the Rukban camp without answers to them, according to the joint statement.

"Positively assessing the fact that the United States has provided contacts of a relevant authority to discuss problems of the Rukban camp…  we stress that the questions, which have been handed over to the Russian side and without answers to which there will be no exit of people from Rukban, are nothing more that another US attempt to undermine the Rukban solution," the statement said.

According to the statement, the questions were "openly provocative" and sought to discredit activities of Russia and Syria on solving the Rukban issue.

"The US command in the At Tanf zone did not assume responsibility for ensuring safe and unimpeded to the humanitarian convoys through the 55-kilometer zone under US control and effectively disrupted the most important humanitarian operation to rescue the Syrian citizens in Rukban," the statement said.

The United States' actions with regard to Syria's Rukban refugee camp seem to indicate that Washington is using the facility to justify its presence in the war-torn Arab country, Russian Foreign Minister Sergei Lavrov said.

According to the Russian foreign minister, the United States refused to allow humanitarian aid to reach the camp unless it went through US-backed militants.

"The fact the US refused [to let the aid through], the fact that it [the United States] demanded only a humanitarian convoy from Damascus and the fact that it does not allow people to leave — turning them, in fact, into hostages — gives me the unpleasant impression that the United States needs this refugee camp only to justify its illegal military presence there," Lavrov said at a press conference.

He pointed out that, according to a recent poll, 95 percent of residents of the camp expressed a wish to return home.

Lavrov said that the Russian military along with the Syrian government had organized two humanitarian corridors to ensure safe passage for the refugees.

"However, now the United States is telling us that they will not allow people to leave the camp," Lavrov added.

In January, the World Health Organization (WHO) described people living in the camp as "trapped," adding that they live "in deplorable conditions." Limited water supply, bitterly cold weather and poorly functioning health care facilities contribute to the rise of diseases, which include influenza, measles, tuberculosis and chronic respiratory diseases, the WHO stated.

The Rukban camp, which houses about 40,000 displaced people, is now the US-controlled zone, which is located in the southern part of Syria, not far from Jordan.