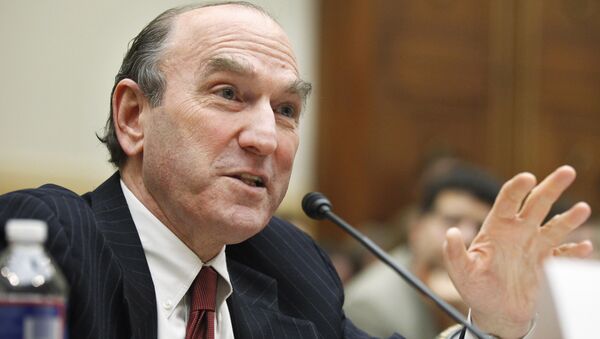 © AP Photo / Manuel Balce Ceneta
Subscribe
International
India
Africa
A group of genocide survivors and their relatives have begun circulating a petition calling for Elliot Abrams, currently the US special envoy to Venezuela, to be removed from his committee position at the US Holocaust Memorial Museum, citing his support for genocidal regimes.

The group of 12 have addressed the United States Holocaust Memorial Council and the Committee on Conscience in a letter in which they identify themselves as "survivors, witnesses and family members lost to genocide, mass murder and other extreme violence perpetrated by the governments of Nazi Germany and the Central American military dictatorships backed by the United States in the 1980s and 90s. Like you, we have come together in the name of advancing values like those contained in the Council's core mission of preventing genocide."

The committee of 45 members under chair Lee Feinstein has as its stated mandate to "alert the national conscience, influence policy makers and stimulate worldwide action to confront and work to halt acts of genocide or related crimes against humanity."

The group writes that in that spirit, "[w]e cannot fathom how Abrams — a proven supporter of the some of the world's most nefarious perpetrators of genocide and mass murderers for nearly 40 years — could be a member of your committee."

Abrams' reemergence on the US policy scene has sparked outrage among those who remember — and abhor — his history as a defender and supporter of violent regimes.

While Abrams was serving in relatively high positions in the US State Department during the Reagan administration, US military aid to ruthless regimes in Central America grew enormously as Washington tried to battle what it saw as Soviet satellites in its backyard. In the early 1980s, as the Guatemalan army was carrying out what the US Holocaust Museum itself described as a "counterinsurgency campaign deliberately aimed at massacring thousands of Mayan civilians," Abrams, as assistant secretary of state for human rights, was supporting the dictator they served, arguing in the US Congress for more military aid for General Efraín Ríos Montt, who he said had brought "considerable progress on human rights" to the country.

The US military had close ties with their Guatemalan counterparts into the 1970s, the New York Times reported in a story on Ríos Montt's conviction, and cultivated Montt after he took power in 1982 as an ally in their fight against Nicaragua's Sandinista government and Salvadoran guerrillas. But by the time 1982 was drawing to a close, the US State Department had evidence the Guatemalan army was responsible for civilian massacres.

In 1983, Abrams told the US Public Broadcasting Service that the kind of human rights progress Ríos Montt had brought to his country "needs to be rewarded and encouraged."

Ríos Montt, of course, was convicted by a Guatemalan court in 2013 of genocide and crimes against humanity. "We are completely convinced of the intent to destroy the Ixil ethnic group," one member of the three-judge panel said.

"In his positions in the Ronald Reagan and George W. Bush administrations, Elliott Abrams participated in and sought to cover up some of the most inhumane acts of recent US foreign policy history," the petitioners note. "Memos released after the war in Guatemala reveal that Abrams was unconditional in his support of the Guatemalan military led by General Efrain Ríos Montt, who killed thousands of Ixil and other indigenous peoples…. Mr. Abrams' resume also includes providing support to Salvadoran military battalions and death squads responsible for the El Mozote massacre of over 900 civilians, including hundreds of children. He also supported Salvadoran governments responsible for countless other massacres of tens of thousands."

The petitioners, of course, are not the only ones going after Abrams — Minnesota Congresswoman Ilhan Omar was the first person in some time to publicly confront the longtime Washington insider in public for his bloody history, for which she drew praise from some corners and jeers from others.

Omar also pointed out that Abrams had pleaded guilty to lying to Congress in 1991 about his role in the secret US effort to arm Nicaragua's Contras, another violent US creation in Central America that would go on to be known for its human rights abuses.

"We, the signatories, ask why the Holocaust Memorial Museum and the Simon-Skjodt Center for the Prevention of Genocide have not taken Abrams' role in Central America into account," the petitioners' letter reads. "How can the Committee on Conscience prevent future genocides if it has not come to terms with the involvement of one of its own members in supporting such atrocities? For these and many other reasons, we demand that the United States Holocaust Memorial Museum immediately remove Elliott Abrams as a member of its Committee on Conscience. His presence on that committee and his affiliation with the Museum runs contrary to everything that you and your mission stand for."

Of course, it could be that the US Holocaust Memorial Museum, standing as it does in Washington, capital of the Cold War victor, still isn't as interested in communist (or so-called communist) victims of atrocities as it is others. They have, after all, chosen an edited version of the famous poem "First They Came," by Martin Niemoller, to display over their building. Most older texts of the poem begin "First they came for the Communists, but I did not speak up, because I wasn't a communist." The US Holocaust Memorial Museum has gone with "First they came for the socialists."

Guatemala's own Holocaust Museum, which opened in 2017, has hosted exhibitions that draw "a lot of parallels to the way that Guatemalans were killed and the way that the Einsatzgruppen and the Nazis killed the Jews and the Roma in Eastern Europe," according to the executive director of a France-based Holocaust memorial organization that created a traveling exhibit for its opening.