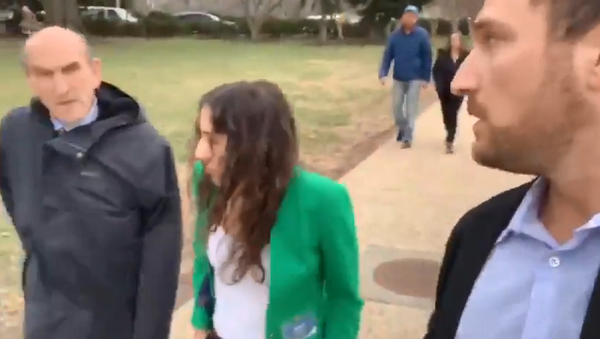 On Thursday, RT correspondent Dan Cohen was apparently threatened by US Special Envoy to Venezuela Elliott Abrams when the latter was questioned on a Washington, DC, sidewalk about his past role in facilitating regime change operations in Central America.

On the sidewalk outside the Organization of American States (OAS) building in Washington, DC, on Thursday, Cohen approached Abrams about his past. Abrams has been appointed by US President Donald Trump to aid the attempted coup d'etat in Venezuela, where Washington has endorsed and pledged support to Juan Guaido, the self-appointed interim president of Venezuela.

"What do you say to people who are skeptical about you because of your history of using humanitarian aid to send weapons to Contras in Central America?" Cohen asked Abrams as he walked out of the building. "Do you have any comment about that?"

VIDEO: Elliott Abrams threatened me after I caught him slipping out of the OAS conference on Venezuela and asked him about his history of lying to Congress and sending weapons to contras in Central America. pic.twitter.com/gydD958cCM

​Guaido made the declaration on January 23, and roughly one quarter of the world's nations have rallied to his cause, declaring the administration of President Nicolas Maduro to be illegitimate and undemocratic. However, three quarters of the globe's nations have maintained normal relations with Maduro's government.

Cohen challenged Abrams on the role he played in the Iran-Contra affair in the 1980s, which involved selling weapons to Iran and using the money to arm and support anti-communist guerrilla groups in Central America.

Congress banned this practice, but it continued for years underneath lawmakers' noses until it was brought to light by a plane crash in Nicaragua in 1986. The wreck revealed US involvement in the arms shipment on board bound for the Contras, right-wing guerrilla organizations at war with the leftist Sandinista government in Managua.

The same program also funded the military dictatorship of Carlos Humberto Romero in El Salvador that had been struggling against the socialist FMLN militant group ever since the military seized power in fraudulent elections in 1977. In 1981, the Salvadoran military massacred the indigenous village of El Mozote, killing over 900 people. Abrams, the point man for Washington in the conflict, dismissed the reports of the butchery as "an incident that is at least being significantly misused, at the very best, by the guerrillas," The Atlantic noted.

US President Ronald Reagan, as well as top Defense Department officials, maintained their ignorance of the Iran-Contra affair, which was carried out by members of the National Security Council, including National Security Advisers Robert McFarlane and John Poindexter. Abrams, then Assistant Secretary of State, was also implicated, eventually being convicted of withholding evidence from Congress. However, through a plea bargain, he was given two years of probation and later pardoned by President George H.W. Bush in 1992.

Cohen continued his line of inquiry as Abrams attempted to ignore him.

"You know, you're gonna need to leave us alone or we will actually have to have you — " Abrams then said, stopping short and gesturing at Cohen in a "well, you know" sort of fashion. "Stop pestering us."

"Wait, what are you going to do? You're going to have what done?" Cohen asked as Abrams walked away.

Cohen's questions mirror those asked by Minnesota Democratic. Rep. Ilhan Omar the previous day, when she grilled Abrams on his part in the El Mozote massacre during congressional testimony.

"In 1991, you pleaded guilty to two counts of withholding information from Congress regarding your involvement in the Iran-Contra affair, for which you were later pardoned by President George H.W. Bush," Omar said. "I fail to understand why members of this committee, or the American people, should find any testimony that you give today to be truthful."

Abrams later defended his 1982 remarks in which he called US foreign policy in Central America "a fabulous achievement."

However, Omar pressed him further, asking whether "a genocide will take place [in Venezuela] and you will look the other way because American interests were being upheld."