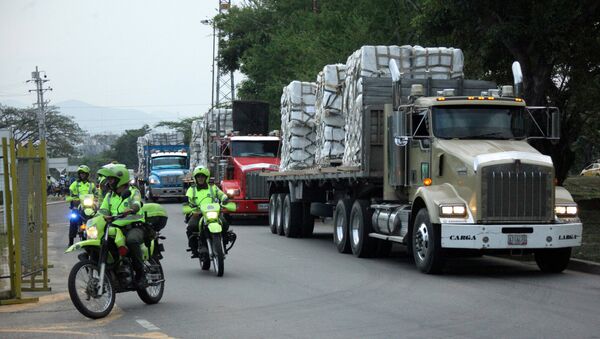 Attempts to bring unauthorized humanitarian aid to Venezuela triggered border clashes over the weekend. Since Colombia is an active supporter of aid deliveries, requested by Venezuelan opposition, President Maduro, who qualifies aid deliveries as attempts to topple the legitimate government, severed diplomatic and political ties with Colombia.

Sputnik has discussed the recent developments in Venezuela with Alan McPherson, a history professor and director of the Centre for the Study of Force and Diplomacy at Temple University and the author of A Short History of US Interventions in Latin America and the Caribbean.

Sputnik: So the US has had a long record of intervening in foreign affairs, we know that, and also within the Latin American continent, to what extent is history repeating itself now with US actions towards Venezuela?

Alan McPherson: To some extent, it is repeating itself, but to some extent, this is somewhat new. I mean, certainly, the United States has been leading efforts in regime change in Latin America for centuries now and it's been successful many times. There's also been a record of the United States essentially hiding its true purposes. Its true purpose here seems to be to have a steady supply of oil to the US market, but it's using the facade of democracy and human rights. But at the same time what it's doing now, essentially peacefully and multilaterally, and I think those are important novelties.

Brazil Urges Int’l Community to Join 'Liberation Effort' of Venezuela - Reports
Sputnik: It's interesting you're saying that now having experience of reading your book on this matter, how much then has the US middling evolved from recent times that you've written about and how is it different from what we saw in the 20th century specifically as well?

Alan McPherson: In the 20th century almost all interventions tended to be unilateral which means using only US efforts and they tended to be violent and military. The United States would send in Marines essentially in gunboats, and since the 1990s really the United States has moved almost always multilaterally with other Latin Americans, with other troops from around the world, with multilateral organisations such as the OAS (Organization of American States), the United Nations and so it appears to be doing something like that here, although it's clearly in the lead.

Sputnik: How dramatic was the fallout of previous US attempts to meddle in Latin America, is this what awaits Venezuela, what's your thoughts?

Alan McPherson: They weren't as dramatic as they can be sometimes. If you think of the Mexican-American war of the 1840s, I mean, the United States took almost the entire Northern half of Mexico. It's taken a lot of territories, but most commonly it's been able to create regime change, and so just in the last 50-60 years it's changed governments in Guatemala, Grenada, Panama, sometimes bringing about some kind of democracy, but sometimes bringing some sort of dictatorship.

WATCH Molotov Cocktails Thrown at US Aid Truck on Venezuelan Border
Sputnik: And whenever it comes to issues like this they're highly complex, the Venezuelan situation, I'm a journalist and I'm still struggling to sort of get a handle on the complexity of it all and probably has some mirror images to Syria in many ways, the complexity, the different factions in and around support, that kind of thing, it's the same with Venezuela lots of people that are for Maduro and obviously a lot of reticence towards him and his administration as well. Are there any means to prevent the US from meddling in Venezuelan affairs and what could that be?

Alan McPherson: I mean, there are certainly means I think the most immediate are Latin American efforts. There are certainly many Latin American countries that don't want open meddling and important regional countries like Mexico have been trying to offer mediation services. Now, unfortunately, the Maduro government isn't particularly interested in negotiation, but non-intervention is a cornerstone of the inter-American diplomacy and so usually Latin American countries will prevent any kind of military intervention if they can find some other way of arriving to a peaceful compromise.

Sputnik: I think one of the interesting elements of the indifference between certain countries with regard to the support or the angst against potential regime change in Venezuela, is you've got all the Latin American governments who are supportive of the US move, and then you got the likes of Mexico, Russia, China, certain countries in the European Union as well who have come out and said it's not really up to us to say that there should be regime change, it should be down to electoral polls within the country itself. What should we take then from the fact that there are so many of Latin American governments that have come out in support of the US move, is that them saying that there is very strong humanitarian needs within the country or is it those countries coming out and showing their reliance on the American government?

Over 60 Venezuelan Servicemen Asked Bogota for Asylum - Colombian Minister
Alan McPherson: I think in the background of much of this there's been a sea change in the politics of Latin American in the last few years and so big governments like Argentina, Brazil and, of course, neighbours like Colombia have changed to pretty right-wing governments that have less of a problem with intervention. This doesn't mean that any of these countries want a US military intervention or even a multilateral military intervention. They simply have recognised the presidency of Guaido, which is not the same as necessarily asking for a regime change and certainly not an intervention. But, yes, it's somewhat unprecedented that so many countries have chosen an alternative presidency for so long. I think it does speak to a sort of the year-long crisis that we've had in Venezuela now. It's been happening for a long time this humanitarian crisis and so the presence of aid at the borders and the problems that it's causing is clearly much more of a political move more than a humanitarian move because it's timed to try to pressure Maduro given that the sort of self-proclaimed presidency of Guaido.

Alan McPherson: It seems that the violence at the border probably will escalate and I think that's one of the reasons that the aid is there, to provoke some sort of reaction from Maduro, from Maduro's troops and, therefore, to try to increase the pressure on him because of this violence. But you mentioned Syria earlier and this could be another Syria where the Maduro regime just hangs on and becomes increasingly violent. So in that case what really might happen in the background and it's already happening is that the United States and other players from the hemisphere, in Europe might try to peel away some of the military leaders and if that happens then you are much more likely to get regime change than simply violence at the border.